The modern name for Eaglesfield is derived from the coat of arms of John Lidgbird, who was made High Sheriff of Kent in 1741 and owned the site. His coat of arms displayed two eagles. The current play park there has seen a number of changes over the years, but as features go, it possibly started out as a dew pond, formed to collect drinking water for the Oxen grazing on deforested areas (hence the name Oxleas)[1. From the Eaglesfield Park management plan (2008 draft).].

At some point it became the yacht pond, as seen in the postcard pictures below, and later still a paddling pool, before being transformed into a play park around 1994.

There’s also pictures of the (hopefully) soon to be reinstated Lily Pond.

Update – plumstead-stories.com sent me another nice one of the park, can’t quite figure out whereabouts it is though: 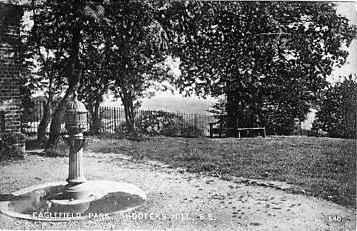 Shooters Hill is a marginal voting area (with the red-blue margin being less than 200 votes in the last council elections – see table below), and the so-called chicken run has been a feature of politics in this area for a while; Tory Bottomley fled to the relative safety of Worthing in 1997, and now Labour Hyland has been accused of performing a similar stunt by shifting to the labour stronghold of Abbey Wood for this year’s council elections on May the 7th. Just goes to show that being a party animal is a job just like any other.

Emigrations such as these free up a bit of elbow room in the local scene, and furthermore, Labour Kelly looks set to stand down, creating even more room for maneuver. Councillor Kelly’s departure is a shame as he’s on record as considering local (as opposed to bridge builder’s) interests during the latest river crossing fiasco. Judging by the figures, he was also the most popular candidate at the last election, a possible indicator that he was actually the local choice? That’s two situations vacant then, the third is currently held by councillor Danny Thorpe, who probably will stand again, but presumably with less support now as he spent around a year of his term in oz. Apparently he had offered to step down, however this did not happen…at least he’s sticking around to fight. Since his return I spotted him in his role as envoi to climate camp, although according to the council press release, it appears the most significant thing to come out of that was confirmation that the camp was actually being held in the borough of Lewisham, who’s kite field must have been good for all those wind turbines! That authority does have a few green councillors though, so they were probably quite pleased, certainly more than mayor bullock anyway, who was very grumpy about it. I’ve only seen Sir Steve once; after Millwall got to the FA cup final in 2004 they had a big party in Lewisham, and at one point he attempted to address the crowd, but was drowned out with calls of “who are ya! who are ya!”

So, with two current councillors leaving, the local tories have sensed their chance, and are raising their game; for instance local tory Maureen contributed to the push for a pedestrian “refuge island” beside woodlands farm – which shows that they are about more than just attacking labour all the time. Another game raising approach has been for tory hopeful Emmett to publish an eponymous website. Actually it’s quite a busy site and certainly contains more material than that of his superior, the parlimentary candidate Dave Gold, who previously tried to get elected in Brighton. An experienced blogger Emmett has a history of writing on national issues, and his preference for this topic led charlton average to express frustration as to why Emmett doesn’t narrow down the 2:1 ratio of national to local stories on his site. That was in May 2009, so I decided to take another look to see if there’s been any change. The plot illustrates increments over time of posts tagged either gordon brown (a favourite subject of Emmett’s) or shooters hill since the beginning of his blog last February. Broadly speaking dynamics in brown related material seem to follow the twists and turns of media coverage in general; there’s a steady flow of brown copy through from feb to may, followed by a flurry of activity in june, incidentally on both brown and the hill – which shows some synchronisation between the two themes. Things then go rather quiet, roughly around the time of the summer recess in parliament, and the holidays in general, so that’s probably nothing to worry about, except that there was actually loads going on locally at the time. From the start of july to the end of november 3 posts about the hill are counted, which is a slightly surprising finding as we had the architectural digs and lily pond events at eaglesfield park, the open day at shrewsbury park, the neighbourhood watch party, the shelving of the river crossing, and a whole series of events at the farm: key moments in the life of the local community that went completely unreported. The start of the conference season sees a steep increase in posts about brown, with no concurrent increase in local affairs, unlike the june spike, this suggests, if anything, a step away from local coverage.

Local coverage on the blog does not seem have to have improved since charlton average scrutinised it. It’s fair to say that as well as running for council, local tories probably do help the parliamentary campaign, so attacks on the incumbent leader are presumably part of the grand plan, but hopefully there’s still time for the candidates to show more interest in the area they want to work for!

Difficulties with this analysis
This plot does not illustrate activity across all tags, it only contrasts on two things, my favourite topic (the hill) at the local level, and the blogger’s favourite topic at the national level (the pm). In recent times his coverage of greenwich council issues has started to shape up a bit better in comparison to rants about gordon brown, so i could look at that as well. For example, various local issues have been discussed such as greenwich time (which is in big trouble at the moment) and thames clipper, so perhaps it is now getting more into local affairs. The other thing to say is that although he misses out a lot of important happenings on the hill, he is at least the only candidate providing potential voters with a public showing of his position via regular posts and tweets.

On saturday I went to Oxleas Meadow for a bit of sledding, it was madness out there! Maddest of all were the grown men, many enjoying their second, or third childhood. Some of them were even breaking with latterday gender apartheid protocol and whizzing down the slopes on pink sleds they had borrowed from little girls. Adults by no means had the monopoly on winter madness though, in fact at moments it felt like the hill had turned into an inventive mess of tea trays, lilos, car parts, plastic bags, baby baths, signs[1. photo by stumayhew.], hub caps, dinghys, and even a kitchen worktop.

I myself had, after a search that began on the infamous snow day last february, obtained a plastic sled from ruxley manor garden centre, and spent a few minutes figuring out how to steer, or at least alert those in my path they were about the experience the ultimate sliding tackle.

Having seen one chap take a running jump and ride head first (on a pink sled of course), I began to appreciate the finer points of sledding technique, and as it turns out an alaskan has committed most of this to the web at instructables.com. This particular individual claims to have reached speeds of 45mph+