There’s another chance to take a guided tour of Woodlands Farm‘s hay meadows this Saturday, 2nd July, when the farm are taking part in National Meadows Day. Maureen from the farm wrote with details:

As part of National Meadows Day there will be a guided tour of the stunning hay meadows at Woodlands Farm. The farm has almost 30 acres of traditionally managed hay meadows bursting with wild flowers, bees, butterflies, dragonflies and other wildlife at this time of year.
The meadows are managed as part of Natural England’s Higher Level Stewardship Scheme.
The walk will be for about 2 hours on Saturday 2nd July 2016 and will start in the farmyard at Woodlands Farm at 1.30pm. If you like meadows and flowers this is the walk for you.

This is the second year that National Meadows Day has taken place: it is planned  to hold it each year on the first Saturday in July, when the country’s wildflower meadows are at their best. It is organised by a number of organisations led by Plantlife, a wild plant conservation charity. There are about 100 events taking place across the UK including guided walks, open days with family activities, kids craft days, scything activities and photography walks. They are also holding a National Meadows Photography Competition with a deadline for entries of 31st August 2016.

Sadiq Khan was Shooters Hill’s choice for London Mayor, taking 48% of the vote in the ward, against Zac Goldsmith’s 28% according to the breakdown by ward of the capital’s votes published by London Elects. The Green’s Sian Berry was third with 7%, followed by UKIP’s Peter Whittle and the Lib Dem’s Caroline Pidgeon. This compares to the 2012 result when Ken Livingstone got 46% of the Shooters Hill vote, against Boris Johnson’s 37%. Across the whole of London Sadiq took 44.2% of first preference against Zac’s 35%, so Shooters Hill was a bit more pro-Sadiq than the rest of the capital

Sian Berry got the most second preference votes, with 24%, though of course these votes don’t count under the system adopted. Only the votes of the top two candidates count, and Sadiq again beat Zac in Shooters Hill with 16% against 10%.

In the ballot for the Greenwich and Lewisham constituency member of the London Assembly, Labour’s Woolwich-born Len Duval once again out-performed the mayoral candidate, taking 52% of the Shooters Hill vote, well ahead of the Tory’s Adam Thomas on 19%. Green Imogen Solly was narrowly beaten into third place by UKIP’s Paul Oakley. The BNP and Britain First did not put up a candidate for the constituency member. Len increased his margin of victory from 2012 when he got 51% of the vote against the Conservatives’ 22%.

The turnout in Shooters Hill ward for the London elections was just 44.24%, excluding postal votes which made up some 22% of the total votes cast. Let’s hope this week’s referendum on whether to stay in Europe gets more voters voting.

One of the striking trends in the ward-by-ward breakdown of the elections for London Mayor is how the balance between the two major parties has changed in Greenwich over the last three elections. This is shown in the three ward maps below showing which party had most votes in each Greenwich ward in 2008, 2012 and 2016. Back in 2008 the borough was split between Labour North and Conservative South, with Shooters Hill ward very much on the cusp voting for Tory Boris for Mayor and Labour’s Len for London Assembly member.  Over the course of the three elections Labour have had the largest share of the vote in more and more wards, moving southwards, until in this year’s mayoral election the conservatives had most votes in just three, and in the London Assembly ballot Len Duval narrowly topped the polls in Eltham North too.

UKIP have also seen an increase in support over these three elections. In the London -wide assembly member polls, where we vote for a party rather than a person, UKIP’s share of the vote in Greenwich has gone from 2.78% in 2008 to 5.67% in 2012 up to 9.35% this year. I understand that we may get a ward level break-down of referendum results: it’ll be interesting to see how this correlates with the parties’ polling in this year’s other ballots.

In the meantime, I’ve finished all my deliveries of Remain leaflets, and freed up Thursday to help with leafletting and reminding Remainers to vote. Fingers crossed that the nation sees sense. 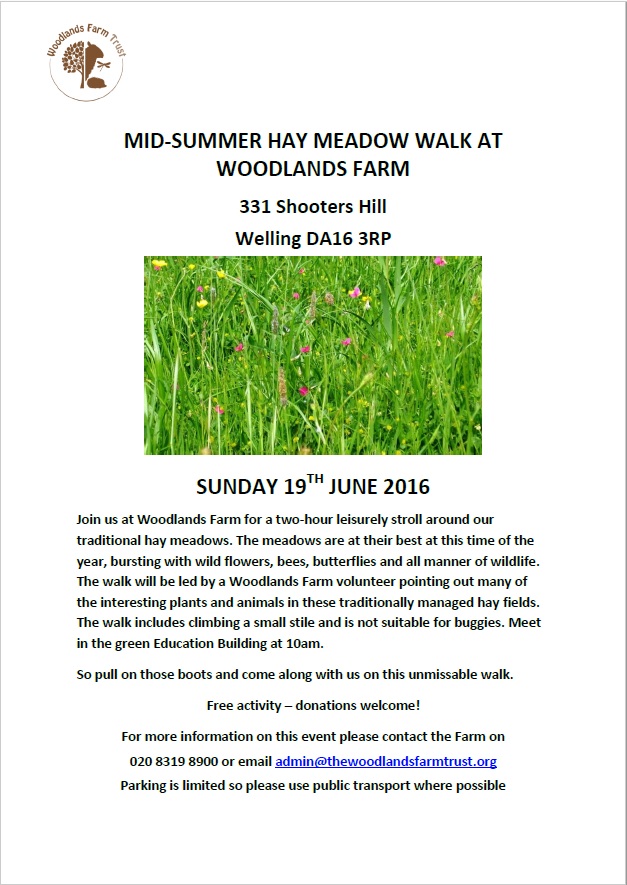 The traditional hay meadows, with their many and varied wild flowers, are one of the wonders of Woodlands Farm and there’s an opportunity to see them at their best on Sunday (19th June) when the farm hold the latest of their monthly walks. Maureen from the farm wrote with details of the mid-summer hay meadow walk which starts at 10.00am:

Join us at Woodlands Farm for a two-hour leisurely stroll around our traditional hay meadows. The meadows are at their best at this time of the year, bursting with wild flowers, bees, butterflies and all manner of wildlife. The walk will be led by a Woodlands Farm volunteer pointing out many of the interesting plants and animals in these traditionally managed hay fields. The walk includes climbing a small stile and is not suitable for buggies. Meet in the green Education Building at 10am.
So pull on those boots and come along with us on this unmissable walk.
Free activity – donations welcome!

For an even closer view of the meadows join the farm’s enthusiastic conservation volunteers on Thursday 30th June at 2 o’clock for the meadow plant survey, when you’ll find them in the meadows surrounded by plant guides examining the wild flowers and grasses. This is one of a series of surveys in the next couple of months, Hannah recently sent round the full  list:

The weather forecast for Sunday is currently “dry with sunny spells” – perfect for a wildflower meadow walk. 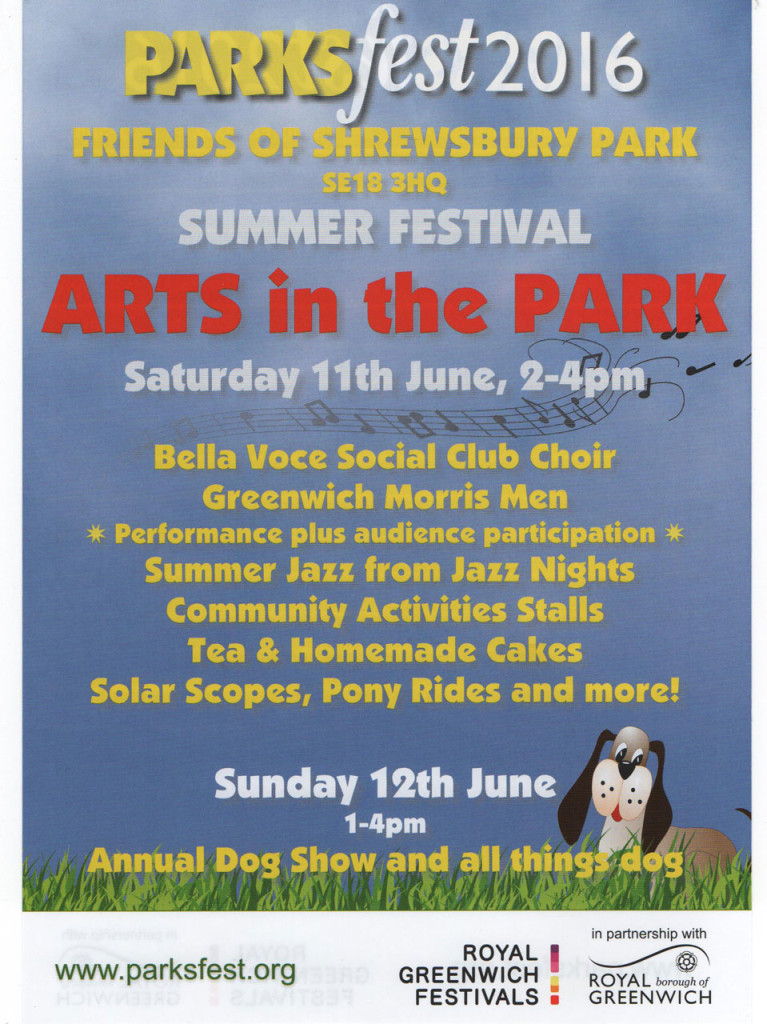 The Friends of Shrewsbury Park are holding a weekend of festivities to mark their tenth anniversary: they first met on 13th March 2006, and have been responsible for many improvements to the park since then. Kathy, the Chair of the management committee wrote with details:

We are planning a weekend of events to celebrate our 10th birthday.  On Saturday 11 June we are holding our summer festival of jazz, choir and dance from 2 – 4pm.  On Sunday 12th June, we are holding our fabulous Dog Show from 1 – 4pm.

The park’s summer festivals are always very enjoyable, with lots of different activities from the Flamsteed Astronomy Society demonstrating how to safely view the sun through to the traditional dancing of the Greenwich Morris Men. And the dog show is always great fun. This year’s line-up looks the best yet.