Last week @CleanAirLondon released the latest information in the ongoing campaign to improve London by improving its air quality. The campaign has two aims: firstly to reduce pollution by getting the government to control it more safely; and secondly to raise awareness of the growing evidence on the dangers of traffic pollution. Currently the main focus of the campaign is on diesel pollution, which is less harmful to the Ozone layer than petrol pollution, but more harmful to humans.

So now to the current report, which looks at the relationship between schools and roads. Presumably for reasons of accessibility, schools are often situated close to civic centres, public transport routes, and roads; often very busy ones. As well as revealing that local schools (Christchurch and Willow Tree) lie within 150 metres of roads carrying more than 10,000 vehicles per day, the investigation gives detailed information about the sheer amount of vehicles in the area: Shooters Hill Road carries 19,120 vehicles daily, John Wilson Street is on 21,625 a day, and Rochester Way takes 91,200. Considering that Shooters Hill has population of 12,854, this effectively means that for every person on the hill, there are 10 vehicles! Add this to the evidence that Rochester Way was the worst affected road during London’s April smog (along with the Old Kent Road), and it does look like the area could do with a bit of help in the fresh air department.

According to the campaigners, one way of improving the air in London wold be to introduce further low emission zones, which could remove the worst vehicles from London’s most polluted roads.

I just read an interesting bit of news on the neighbourhood watch site, Apparently we hillians are being encouraged to collect data on speeding drivers, and relay this to the met’s traffic police via 999:

Sergeant Barry Edge confirmed the issues of speeding drivers around Shooters Hill could be tackled by getting the traffic division of the Met Police involved, but this will only happen if more residents call the issues in.

We need your help in calling any issues of speeding drivers, logging the date, time and registration numbers.

So, provided any speed freeks don’t whizz by too fast, and the vital statistics can be taken, why not 999 it (noting that callers are sometimes interrogated about themselves as well as the dangers they see).

According to the latest police report for this ward, local safety is up on the last quarter, so collecting previously unknown information on speeding would support new safety initiatives in the area (such as solar powered smiley/frowny faces), and perhaps even give the police the odd chance of a go in the helicopter.

I got my first air quality warning from airtext.info today, after three whole months of London air quality giving no cause for alarm!

The london air quality network, who recently released a popular updater for iphones have reported a couple of moderate particulate readings as a result of light southeasterly winds bringing particles over from Europe coupled with the build up of traffic emissions during a cold and foggy night over here. Their highest readings tend to coincide with guy fawkes night!

Anyway apart from thinking about how dirty London is, here’s a nice rose plot of the 2009 average wind direction (in degrees from north) and speed (in meters per second) of readings taken from the falconwood site. I had always thought that the prevailing wind came from mexico (roughly 210°-240°), and usually the kites in blackheath do catch that breeze… but judging by the data (which are apparently to interpreted with some caution due to obstructions) the easterly wind (90°) seems to be the strongest, presumably it whistles up the thames all the way from siberia, brrr!

** Update ** for a bonus, which is mainly useful to those who are wondering where a case of what the daily mail infamously referred to as ‘le/der stink‘ might be coming from, here’s an updater that retrieves the wind data for the last seven days. 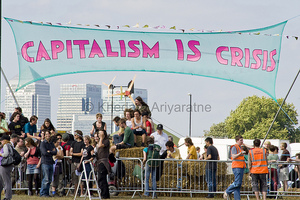 Shooters Hill Road is currently home to Climate Camp 2009, in the kite field! No wonder they are finding it a bit blowy, those popular little 2 second tents don’t look designed to deal with bracing blackheath, but we’ll see.

There is a six day programme of free activities ranging from workshops, to live performances, to sustainable living, so it all feels rather jolly and festive, and innocent bystanders seem to be quite safe.

Shooters Hill’s own Councillor Danny was there as the envoy of Greenwich Council, and lots of other local people are visiting the campers – who have pitched up in clear view of Canary Wharf, a symbol of the interests being held to account for profiting from arms trading, carbon “gambling”, and coal power.

The police are doing an excellent job of staying out of trouble, and are standing by at their own camp over the road just in case they are needed; which so far hasn’t been the case. It should however be mentioned that if you do visit the site, it would be wise not to take anything that could potentially be construed as a weapon; which primarily includes glass bottles, penknives, and dogs, although I did see a nice whippet there.

On Tuesday June the 30th I was on the way to work and saw a police biker at the roadside pulling over drivers so they could be interviewed by traffic surveyors modelling journeys on behalf of tfl.

According to the researchers, this particular survey is a routine exercise, and will provide London’s traffic managers with an insight into the toing and froing in this area. This sounds plausible and even sensible, however, it also transpired that similar ‘routine’ inspections are being carried out in east london. Perhaps I was wrong to infer the link, but the utterance of the words east london, south east london, and traffic modelling in one sentence immediately made me think of Ringway 2…

Traffic designs linking the south/north twistulars completing an inner london ring road go back at least as far as the now infamous Ringway 2 blueprint of the 1960’s, and they seem here to stay, in design form at least. These plans were succesfully blocked by the people of south east london in 1973, 1993 and 2008. Things looked especially bad for Shooters Hill in the early nineties, but the area did ultimately fare better than Wanstead and Twyford Down…

On past form at least, Shooters Hill does appear to be safe from the bulldozers for at least another ten years. However the surrounding area may not be, as attention has now shifted to Blackwall. Clive Efford is currently lobbying for a third blackwall crossing, which would include a doglands light rollercoaster to north greenwich and onwards to eltham. His campaign has its merits, primarily it doesn’t have ill intentions for the woods, secondly it makes use of pre-existing links to the south/north twistulars and A2 (which was the original justification for the oxleas woods bypass linking the A2 at falconwood to the crossing at woolwich), and thirdly, the inclusion of a public transport link is a very smart idea as it improves the image of what is, first and foremost, a road building scheme. There are probably some potential traffic problems to be worked out however, and this will be done with traffic modelling!!

If the link at Blackwall gets improved, will it attract more traffic? Will the approach roads and residential areas on each side be able to accomodate extra through traffic?… Furthermore, Blackwall has never had a particularly good record on pollution, air quality measurements at woolwich flyover routinely fail to meet the air quality objectives, what will the building of new roads do for air quality? (Actually for balance it should be added that most of London fails to meet its pollution targets – not that that makes it alright for blackwall to be as bad as it is).

On that note, here’s the survey debrief:

This survey has been commissioned by Transport for London (TfL). Colin Buchanan is conducting it at this site on their behalf.

In order to address transport problems, we need to know more about current travel patterns and so are conducting the survey. It is taking place at a range of locations across the study area. It will last only one day at each location. Stopping vehicles in this way is the only effective way of establishing the volume and types of journeys being made on a typical day.

Thank you for taking the time to provide TfL with this important information.

We would like to apologise for any inconvenience caused by the survey. Every effort has been made to minimise disruption and congestion, but it is not always possible to achieve this as successfully as we would like.

Should you require any further information about the survey please contact us using the details below. Phones are not continuously manned, but calls will be returned within 24 hours.

Three days ago I emailed the supplied contact details to enquire about the motivations for this survey, if I hear back, I will comment further…