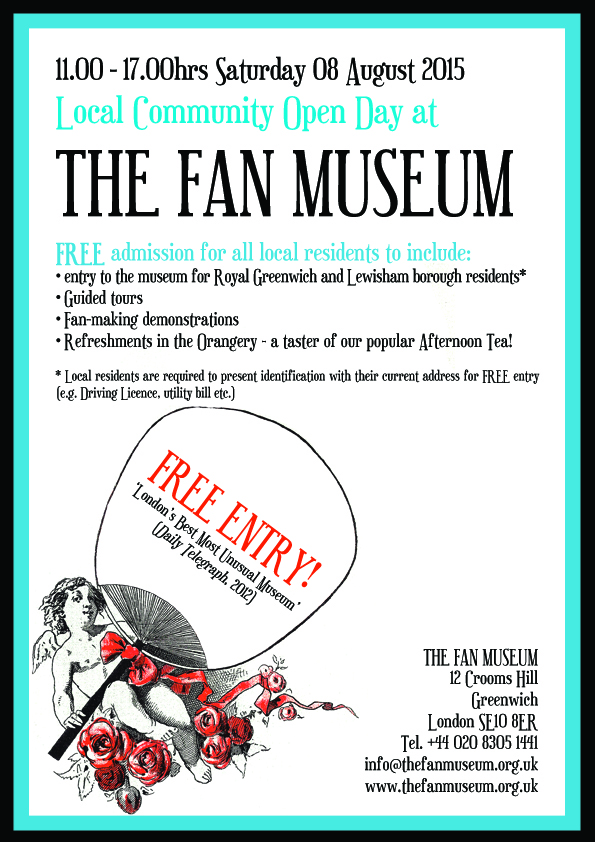 The Fan Museum in Crooms Hill is holding what has become its annual open day tomorrow, Saturday, between 11.00am and 5.00pm. Residents of Greenwich and Lewisham can get in free provided they bring along some form of identification with their current address (e.g. Driving Licence, utility bill etc.). The museum’s press release gives some background:

Located in the heart of historic Greenwich, The Fan Museum occupies two handsome Grade II listed Georgian townhouses – lovingly restored internally and externally. It is the only museum in the UK devoted in its entirety to the history of fans and the ancient craft of fan making. The museum houses in excess of 5,000 objects (not all on show at any one time) including works by Salvador Dali, Paul Gauguin and Walter Sickert.
The museum comprises two distinct displays. One is permanent, and serves as an introduction to fans: their history, manufacture, types and sources. The other is thematic, and changes several times a year. The museum’s current exhibition, Fans of the Belle Époque features a glittering array of fans dating from 1890s-1910s.

There will be curator-led mini tours for visitors and fan-making demonstrations throughout the day, plus a chance to sample their acclaimed afternoon teas. 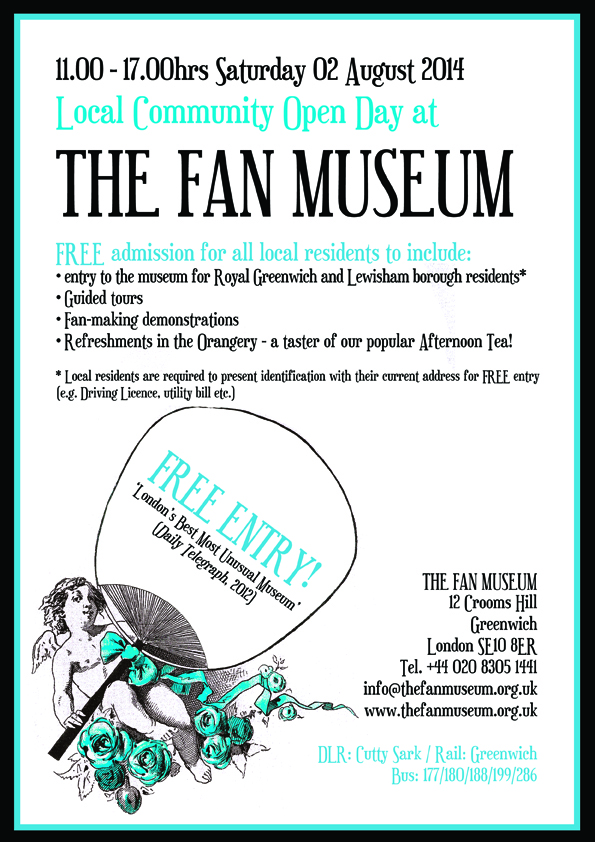 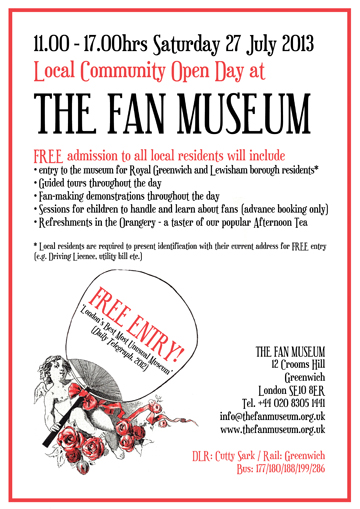 Emily from the Fan Museum in Crooms Hill e-mailed details of their local community open day next Saturday, 27th July, from 11.00am to 5.00pm. Entry is free if you live in Greenwich or Lewisham boroughs, as long as you bring along proof of your address such as a driving licence or utility bill. The museum is in a beautiful Georgian house at the bottom of Crooms Hill, address: 12 Crooms Hill, Greenwich, London SE10 8ER.

The Fan Museum has a huge collection of fans from different cultures and historical periods, many of which are artistically decorated. As well as the chance to see the collection the open day will include demonstrations of fan making and mini-tours of the museum led by the museum’s curators. There will also be refreshments in the elegant orangery – a taster of their afternoon tea which was rated one of London’s ten best afternoon teas by the Daily Telegraph. The Telegraph’s list also included the far-more-expensive Claridges and the Chesterfield Hotel in Mayfair.

It’s several years since I visited the museum and it was slightly surprisingly absorbing,  so it’s definitely time for another look around, even if only to replace the fan tea towel I got from the museum shop last time.