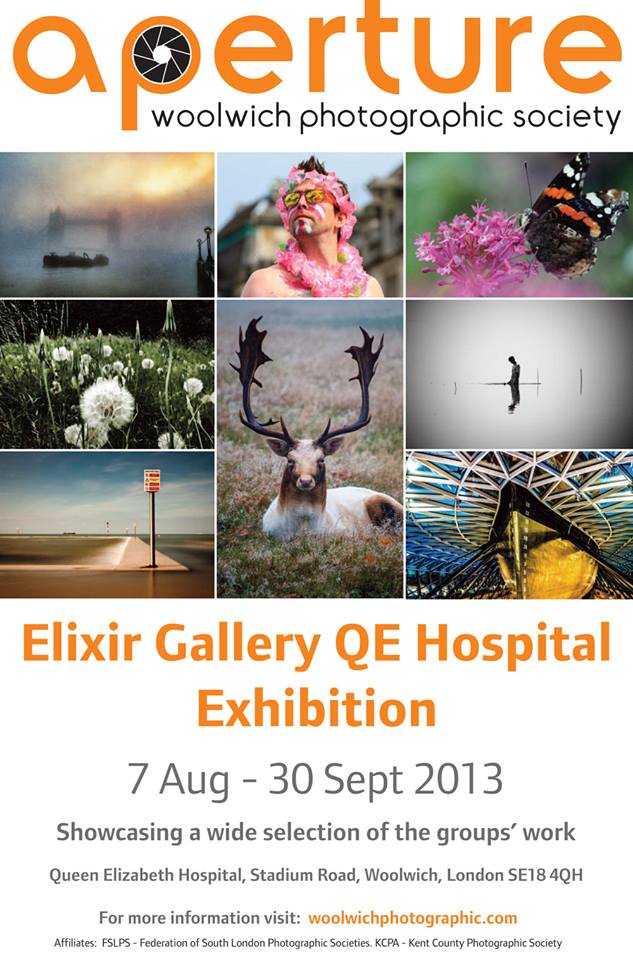 The aperture Woolwich Photographic Society’s latest photography exhibition is now on at the Elixir Gallery in Queen Elizabeth Hospital. The free exhibition is reached by turning left inside the main entrance of the hospital and walking along the corridor past the fever bell and up the slope. It includes some prints from the Charlton House exhibition in July plus some new ones from aperture members. The exhibition runs until the end of September.

aperture have also announced details of their “Bridge Programme” which starts next Tuesday (3rd September) at 7.45 in the library at Shrewsbury House. It’s called the bridge programme because it spans  the change in the club’s calendar which used to run from  September to May but in future will run March to December.  This evening’s meeting will be a social event to introduce the programme and review some of the best images from aperture’s last season. The new programme includes talks by The Flamsteed Astronomy Society about astrophotography and by Graeme Webb about his diorama and miniature photography entitled “A Journey into The Arcimboldi Studios“. 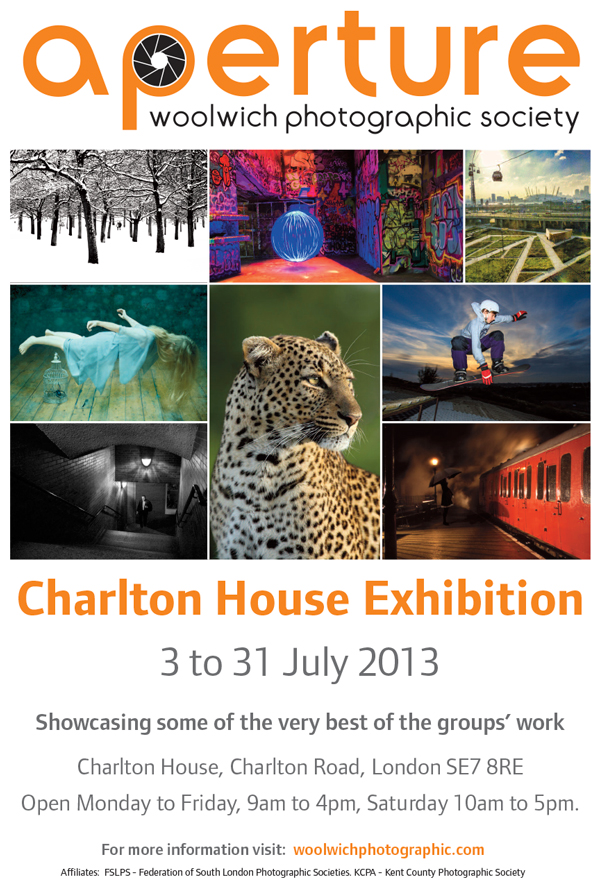 The Mulberry Tea Rooms in Charlton House play host to an exhibition of photographs by members of the Aperture Woolwich Photographic Society, one of the groups who meet at Shrewsbury House. The Exhibition is a selection of images that have done well in AWPS competitions over recent seasons by members of the society including Stu Mayhew, Andy Linden, and Trudie Mackie. There are a variety of  amazing images, some spookily atmospheric, some surreal and some that have you asking the question “how on earth did they do that?”

Entry to the exhibition is free, and it runs until 4.00pm on Wednesday 31st July. The AWPS are planning another exhibition to be held later in the summer at the Elixir Gallery at the Queen Elizabeth Hospital and they will have a stand at the  Horn Fayre at Charlton House on 28th July.

I wandered up to the elixir Gallery run by Verve Arts at the Queen Elizabeth Hospital while waiting for an appointment this morning, and was totally (but pleasantly) gob-smacked by the exhibition of  infrared photography by Andy Linden that is currently on display there. A poster by the exhibition describes it:

All the pictures in the exhibition were taken using an SLR digital camera that has been converted so that it is sensitive to the infrared (non-visible) part of the spectrum.

Leaves and foliage strongly reflect infrared radiation, so they usually appear bright in an infrared photograph. The majority of these pictures were taken in and Greenwich Park and the surrounding areas. They have been post-processed in Photoshop to produce the tones that appear in the final prints.

There are more infrared photographs by Andy Linden on his Flickr site.

The exhibition is well worth a visit. It ‘s free and it runs until 13th May.

The aperture Woolwich Photographic Society, which meets in Shrewsbury House, will be celebrating its 120th anniversary next year – it was founded in 1892. To celebrate they have an exhibition of photography in the Elixir Gallery at the Queen Elizabeth Hospital. To get to the Elixir Gallery you turn left after going in the main entrance of the hospital, along the corridor then up the slope.

Aperture also had a display of their members’ photography at the recent Tarts and Crafts at Shrewsbury House, and more on their flickr page.

The Elixir Gallery is looked after by Verve Arts, which runs arts programmes in South London Healthcare Trust hospitals. They are holding a photographic competition entitled “GREEN CHAIN CAPTURED 2012” and have invited photographers to enter photographs taken along the Green Chain Walk in Greenwich. Details of how to enter are on their website. The best 30 photographs will be exhibited in the Elixir Gallery.

They  are also running three free photographic workshops next February:

Need some advice on what makes a really great nature photograph? There will be three FREE photographic workshops led by professional photographers on walks along the route as follows:

I’ll add these workshops, and the aperture meeting programme to the blog calendar which automagically shows events’ reminders over to the right.