The well-supported opposition to the mobile communications mast next to the old fire station in Eaglesfield Road received a setback recently with the decision by the Planning Inspectorate to allow the appeal by Orange PCS Ltd against the Council’s decision to refuse consent for retention of the existing equipment on the mast.

This means that Orange can keep their dishes on the mast.

As discussed in previous posts, many local people opposed the application, led by SHAM (Shooters Hill Against Masts). There were 89 objections to the original application, and a substantial number signed a petition demanding removal of the mast completely. However removal of the mast wasn’t really within the scope of this appeal; it was just about the specific Orange dishes. And it was always going to be tough to defend the Council’s decision to refuse permission to keep this existing equipment, especially as they had previously granted permission for the TETRA-based equipment that also adorns the mast.

All seats were full at the appeal meeting, back in September, and a number of people spoke against the mast. They were supported by local MP Clive Efford and Councillors Jagir Sekhon and Danny Thorpe. Objectors spoke passionately about the impact of the mast on the Shrewsbury Park Conservation Area and the grade II listed former fire station, and concerns that installation of additional equipment on the mast would result in an eyesore like the nearby Oxleas Wood mast. They also pointed out the disparity in treatment between the mobile operator putting dishes on the mast, and householders in the Laing Estate who face restrictions on installation of satellite dishes because they live in a conservation area. The Planning Inspector, John Papworth, was scrupulous in ensuring that everyone had a chance to state their case, but in his report concluded that the appearance of the mast wasn’t significantly changed by the equipment that the appeal was considering, and that it could even be considered that the mast had an historical association with the former fire station.

Safety is the one of the prime concerns of the objectors, who spoke persuasively about the need to adopt the precautionary principle, erring on the side of safety, when considering the potential impact on health. The Health and Safety Manager representing Orange initially reduced his credibility by admitting that he had taken his radiofrequency emission readings at 3.00pm, far from a peak usage time for mobile phones. However he had taken readings from a number of places, including flats in the Fire Station closest to the mast. His readings had shown that the radiofrequency levels are less than 1% of World Health Organisation approved guidelines, and he stated that at peak times this would only increase by a fraction of a percent. The Inspector concluded that given “…current advice relating to the likelihood of harm from these installations, the health objections raised are outweighed by the benefits of telecommunications”.

Safety of radiofrequency emissions is subject to some dispute, with current scientific evidence in disagreement with anecdotal evidence of harmful effects. Without getting into the details of the debate, one thing is clear: many people are very concerned about potential health impacts of mobile phone masts. I’m sure I would be if I lived very close to one. It’s surprising that more is not being done by telecommunications and government organisations to allay fears, and where necessary adopting the precautionary principle and ensuring masts aren’t too close to homes.

What next for SHAM, I wonder?

I just read an interesting bit of news on the neighbourhood watch site, Apparently we hillians are being encouraged to collect data on speeding drivers, and relay this to the met’s traffic police via 999:

Sergeant Barry Edge confirmed the issues of speeding drivers around Shooters Hill could be tackled by getting the traffic division of the Met Police involved, but this will only happen if more residents call the issues in.

We need your help in calling any issues of speeding drivers, logging the date, time and registration numbers.

So, provided any speed freeks don’t whizz by too fast, and the vital statistics can be taken, why not 999 it (noting that callers are sometimes interrogated about themselves as well as the dangers they see).

According to the latest police report for this ward, local safety is up on the last quarter, so collecting previously unknown information on speeding would support new safety initiatives in the area (such as solar powered smiley/frowny faces), and perhaps even give the police the odd chance of a go in the helicopter.

Recently it’s been observed that fixed penalty notices are being handed out in the area for pavement parking. The council are possibly going to apply this law more intensively now as they are probably getting fairly desperate for cash, what with central government pulling the plug on building three borough schools, so drivers beware… pedestrians however can probably enjoy having a bit more of their space back.

You may have noticed some road works going on around the bull, this is something to do with safety improvements being made to various places along the hill. What I’m just about to reveal was first mentioned on the neighbourhood watch website which now boasts a shiny new design and has changed to cover the shooters hill police ward, presumably in line with its links to the met, which incidentally has a rather whizzy map based site about crime in the area; did you know that this ward has one of the lowest crime rates in the borough.

The changes due to take place are as follows:

Let’s hope it works! I personally feel that these changes could have taken the side of the pedestrian a bit more than they did, but there might be a good reason for keeping the traffic moving.

Earlier this month I wrote about what I referred to as the old fire station on Shrewsbury Lane.

It was then brought to my attention that referring to the station on Shrewsbury Lane as old is a mistake, because in actual fact that was the new one, and there was another one before that, by the old police station… Now I’m not going to make the same mistake again and refer to the old police station as being the one where the hill meets well hall road, just because there’s no police stationed there any more, but judging by this postcard picture viewed from lower down the hill, the old police/fire stations can be made out, well, apparently the police station replaced the gallows, and the fire station is probably the building next door with a large entrance and lots of very tall chimneys!

Anyway, I was also provided with these pictures of the old station itself, and a little bit of history – apparently it opened in 1879 for horse drawn engines, and closed in 1912 when the new station opened in a more strategic (?) hill top location. Following the move, the building was then used as a Warrant Officer’s quarters for the War Department, and presumably fell into disuse during less warlike times, and was knocked down. Looking at the second picture is quite interesting as the firemen being photographed outside their station are joined by two little boys, I wonder what they did – given the dickensian style of the picture it wouldn’t surprise me if children did work there, although they aren’t wearing uniforms… so perhaps they didn’t make much of a public showing, and their job might have been to keep the place warm when the men were out on duty. Anyway, rather than speculating, I should probably go and do some more investigation, when I can make the time. 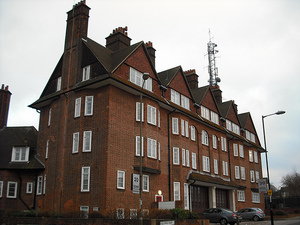 Recently I welcomed two huge firemen into my place as part of the free home safety visit[1. You can also call to arrange a visit: ℡ 08000 28 44 28.] scheme, which is currently being carried out by London Fire Brigade – this includes the installation of smoke alarms. The visit itself was quite brief, and aside from setting up alarms, it includes an education in safety, also available on directgov which is organised under a series of headings:

I was reminded that, like lots of electrical items (batteries, toys etc), smoke alarms would contaminate landfill with lead/lithium/cadmium etc, and should be disposed of at nathan way.

The other thing that happened is that I started to ask about the selling off of the fire station, the historical preservation of the doors, and where our new station is (Eltham High Street). As a result of the closure, the call out time for this area is around 3 minutes longer. This makes home safety all the more important, especially during icy winter when the hill becomes less accessible to traffic.