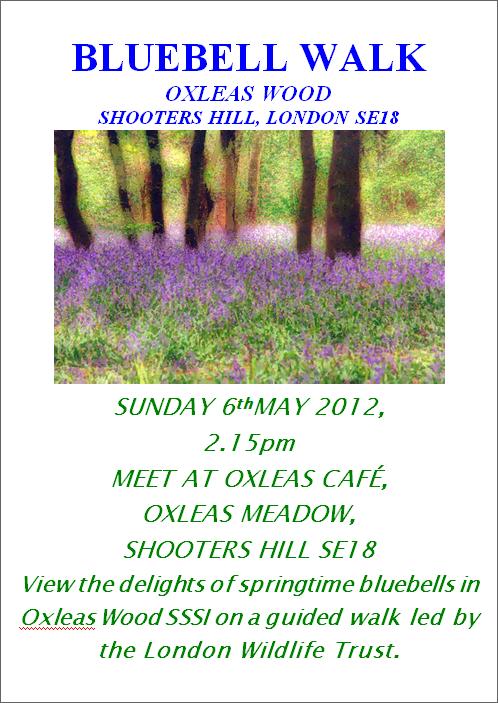 There’s a great opportunity to see the bluebells in Oxleas Wood  this Sunday, 6th May when the London Wildlife Trust have arranged a Bluebell Walk. The walk will be led by Mary O’Sullivan of the LWT and Dr Barry Gray, who is Chair of the Trustees of Woodlands Farm. It is expected that the walk will last 1 to 2 hours, but people can join or leave at any time. It starts at 2.15pm (meet at 2.00pm) at the Oxleas café and finishes opposite Woodlands farm on Shooters Hill Road, so there’s a chance to visit the farm and see their new lambs as well.

I wasn’t aware that the nineteenth century Liberal Prime Minister W.E. Gladstone was once the MP for Greenwich until I noticed the plaque on the side of Eglinton Road School. But he was, between the years 1868 and 1878, which included the time of the first of his four premierships. His valedictory speech to about 3000 of his constituents at the Herbert Park Roller Skating Rink, now the site of Eglinton Road School,  lasted two hours. They must have been releived that this was  much shorter than his record budget speech as Chancellor of the Exchequer which took nearly 5 hours.  The speech marked the end of Gladstone’s time as Greenwich MP;  he immediately went on to campaign for and win a seat in Midlothian.

With an election coming up in a couple of days, I was particularly interested in Gladstone’s part in extending the right to vote, but his farewell speech also resonated with other current events in that it was about his passionate opposition to a war in Afghanistan, the second Anglo-Afghan War, and included the passage:

“Yes, gentlemen, the disease of an evil conscience is beyond the prac­tice of all the physicians of all the countries in the world. The penalty may linger; but, if it lingers, it only lingers to drive you on further into guilt and to make retribution, when it comes, more severe and more disas­trous. It is written in the eternal laws of the universe of God that sin shall be followed by suffering. An unjust war is a tremendous sin. The question which you have to consider is whether this war is just or unjust. So far as I am able to collect the evidence it is unjust. It fills me with the greatest alarm lest it should be proved to be grossly and totally unjust. If so, we should come under the stroke of the everlasting law that suffering shall follow sin; and the day will arrive—come it soon or come it late— when the people of England will discover that national injustice is the surest road to national downfall.”

Gladstone was also a supporter of electoral reform and the extension of the right to vote, becoming known as “the people’s William”. The changes started before Gladstone’s time  with the 1832 Reform Act which is seen as the start of the move towards universal suffrage, one of the few things I remember from school history lessons. It could be argued that Gladstone’s support for electoral reform pushed the Conservatives into passing the Second Reform Act in 1867 which enfranchised 1,500,000 men, almost doubling the electorate. All male urban householders and male lodgers paying £10 rent a year for unfurnished accommodation got the right to vote. Gladstone himself was responsible for the Ballot Act in 1872, bringing in the secret ballot for elections, and the  Third Reform Act in 1884 which gave rural men the same voting rights as those in the boroughs. Even after this some 40% of men and all women didn’t have the right to vote.

It wasn’t until 20 years after Gladstone died, in the 1918 Representation of the People Act sometimes known as the Fourth Reform Act, that the right to vote was given to all men over the age of 21, and women over the age of 30 who met  minimum property qualifications. Women finally achieved  electoral equality with men in 1928 in what was known as the Fifth Reform Act or the Equal Suffrage Act. Then in 1969 the age  at which someone could vote was lowered from 21 to 18.

So it took a long time to get the right to vote, and many people battled and were punished with  jail or worse on the way – from the Levellers and Chartists through to the Suffragettes, which is one reason why I will definitely be voting on Thursday.

The map below shows the location of all the polling stations in Shooters Hill, including the recently installed portacabin in Donaldson Road, though remember that you can’t go to any Polling Station in the ward – check your polling card for your station. There’s a good summary of the instructions for how to vote here, but don’t forget that we only get two preferences on the pink ballot paper for Mayor.

Finally, the Guardian have a 10 question mayor maker, which may help anyone who’s wondered what the policies in the campaign actually are.