Shrewsbury House are holding a Big Curry evening in April to raise money for the Army Benevolent Fund, a charity that supports soldiers, former soldiers and their families. The Soldier’s Charity Big Curry has been running for 6 years and is supported by a number of celebrity chefs including Jamie Oliver, Brian Turner and Heston Blumenthal. Since it started it has raised £860,000 for the ABF.

Len’s e-mail with details of the Shrewsbury House event said:

Shrewsbury House are holding a charity night for the Army Benevolent Fund, this charity has been going since the early 1900’s and they have been holding charity events all over the Country to raise money for those that need it.

We are restricted to 70 tickets which are on sale at £16.50 pp, this includes Curry, Entertainment, Complimentary drink on arrival and entry into a prize draw. The dress is smart casual and is to be held on Saturday 20th April from 7 pm to 11 pm. We have tried to make this coincide with St George’s Day and will hopefully bring out the best of British and aid and assist our soldiers that need that little bit extra.

If you wish to purchase tickets, either let me know by email or by going into Shrewsbury House.

Sounds like a great evening for a very good cause. 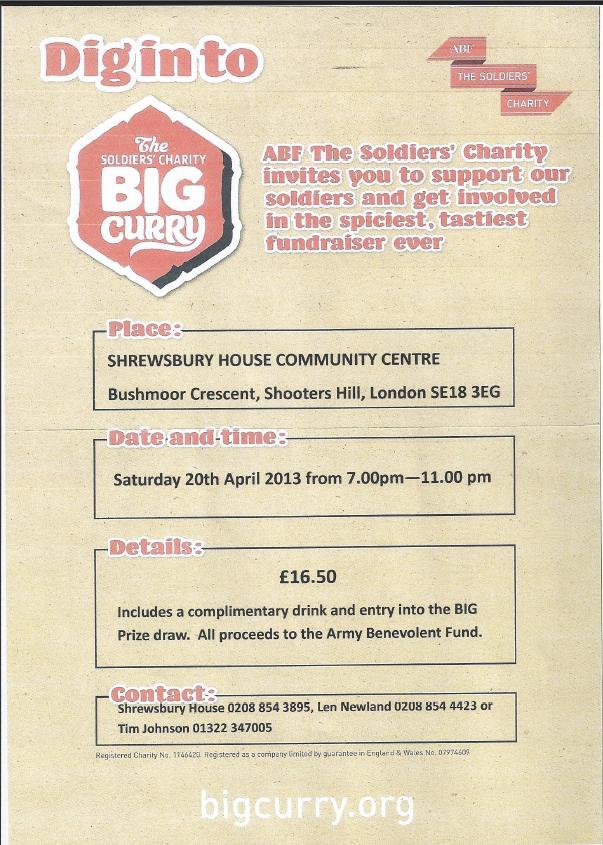