Transport for London have published the results of the River Crossings Consultation which they ran earlier in the year. It shows that more than 70% of respondents supported a Bridge or Tunnel at Gallions Reach (71%), and a tunnel between the Greenwich Peninsula and Silvertown (77%). Smaller numbers, just over 50%, supported a new ferry at Woolwich (51%) or Gallions Reach (52%).  The TfL diagram summarising the results is included below. 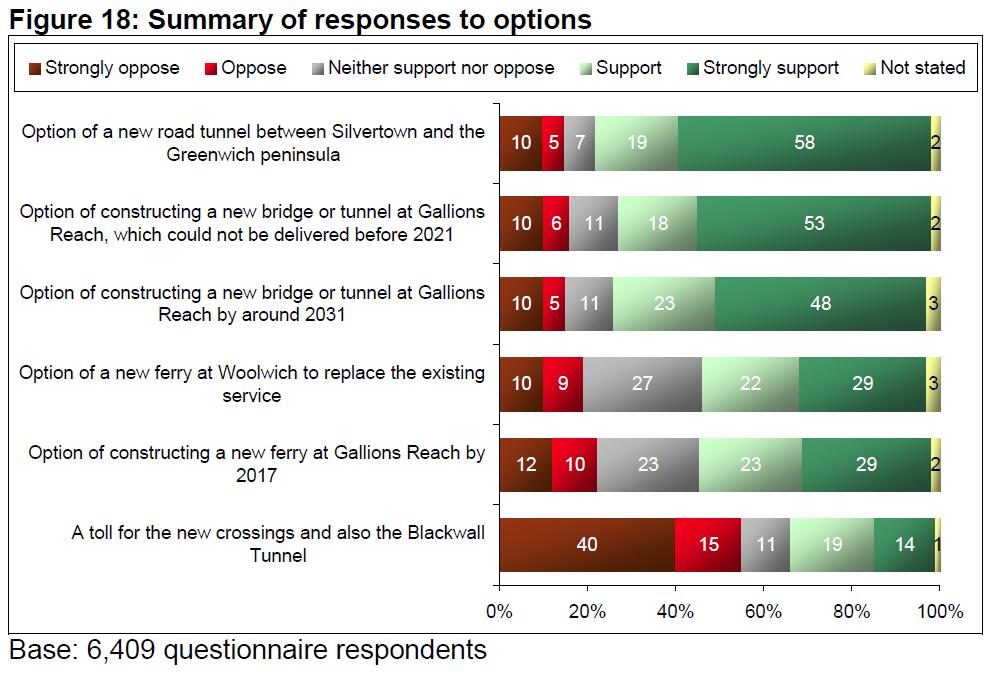 What happens next? Well TfL will be considering the issues raised and will produce another report responding to them later in the summer. However they do give some indicative milestones. For the Woolwich/Gallions Ferry options they are:

… the overall indicative milestones for progressing the review of Woolwich/Gallions Reach options are set out below:
• April – September 2013: Traffic modelling, engineering, economic analysis and development potential, charging strategy and wider benefits
• October – December 2013: Gallions Reach options consultation
• March – April 2014: Presentation of Gallions Reach consultation to the Mayor
• May 2014: Mayoral announcement on Gallions Reach preferred option
• Future milestones depend on option chosen but, subject to funding, it is possible to implement a ferry by 2018 or a fixed-link by 2025

And for the Silvertown tunnel:

If the Mayor gives the go-ahead the detailed analysis of the options – Traffic modelling, engineering, economic analysis and development potential, charging strategy and wider benefits – will be done by September this year for the eastern-most options and February next year for the Silvertown Tunnel. I suspect it is only then that the real debate can start.

I won’t repeat what I think about the proposals, it’s been covered in previous posts, apart from one observation. On the Bluebell Walk through Oxleas Woods last weekend, in the midst of the historic cants of coppiced Hazels and Chestnuts deep in the wood , the walk leader Barry Gray pointed out an old metal tube sticking up a couple of feet out of the ground. This, he explained, was a relic of the water table analysis of the proposed route through the ancient woodland of a motorway from the A2 to a bridge at Gallions Reach. There seems to be a consensus that the roads leading to the Gallions crossing are inadequate for the expected traffic flows. If we’re not careful the woods will be threatened again.

Oh, and of course it will be the end of the Free Ferry: the new crossings will all be tolled.