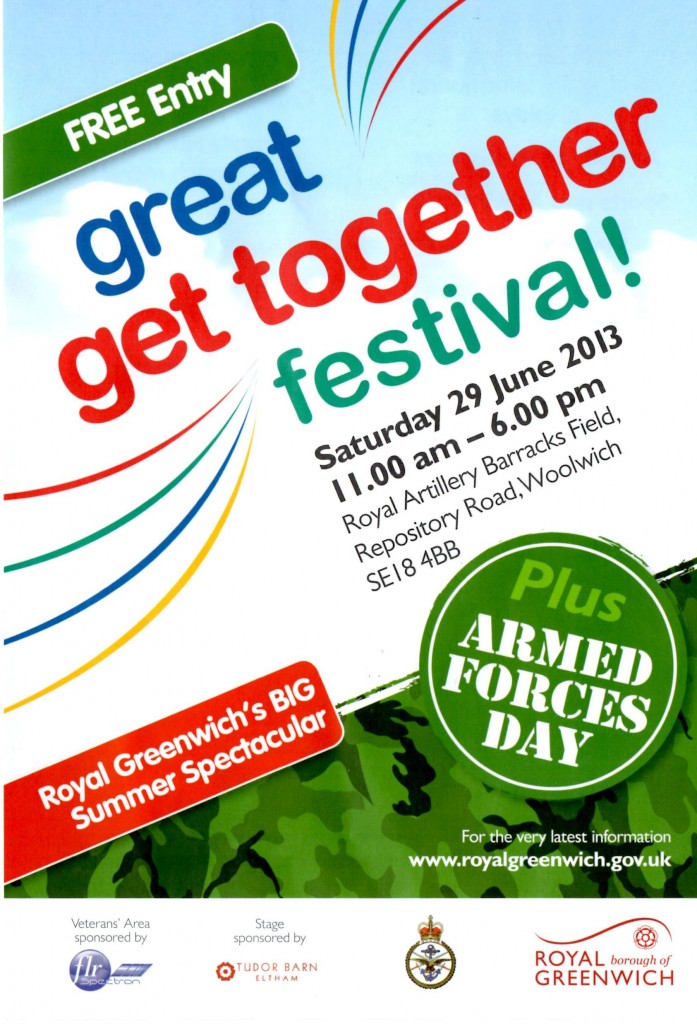 The Great Get Together/Armed Forces Day festival will be a sadder event this year following the murder of Lee Rigby just near the Royal Artillery Barracks. However this opportunity for members of the public to show their support for “the men and women who make up the Armed Forces community: from currently serving troops to Service families and from veterans to cadets” is sure to be well attended. Last time it was held, two years ago, some 15,000 people attended.

The festival is organised by the Royal Borough of Greenwich and the Army and runs from 11.00am to 6.00pm on Saturday, 29th June  at the Royal Artillery Barracks. It should be an excellent day, the Armed Forces Day web site lists the events and activities:

On Saturday 29 June the Royal Artillery Barracks will be hosting one of the UK’s largest Armed Forces Day events. The event is combined with the Great Get Together Festival – a large and vibrant community celebration. The array of attractions will include a military and vintage vehicle display zone, historical re-enactments, walk round entertainers, a live music stage, charity and commercial stalls, animal displays, lazer quest, zorbing balls, fairground rides, sports taster sessions and many other things for all ages to see and do. At the heart of the event is a large arena with a thrilling programme of spectacular military displays and marching bands, along with stunt car shows, bird of prey demonstrations, and more. Entry to the event is free. Visitors will be able to park in dedicated parking areas for a small charge. The event is organised by the Royal Borough of Greenwich in partnerhsip with the Army at the Royal Artillery Barracks. When it was last held in 2011 it attracted between around 20,000 people

Amongst the stalls in the marquees will be one from Shrewsbury House who are publicing the many and varied activities that happen at the house, including the fact that they are now licensed to hold civil and marriage ceremonies there.