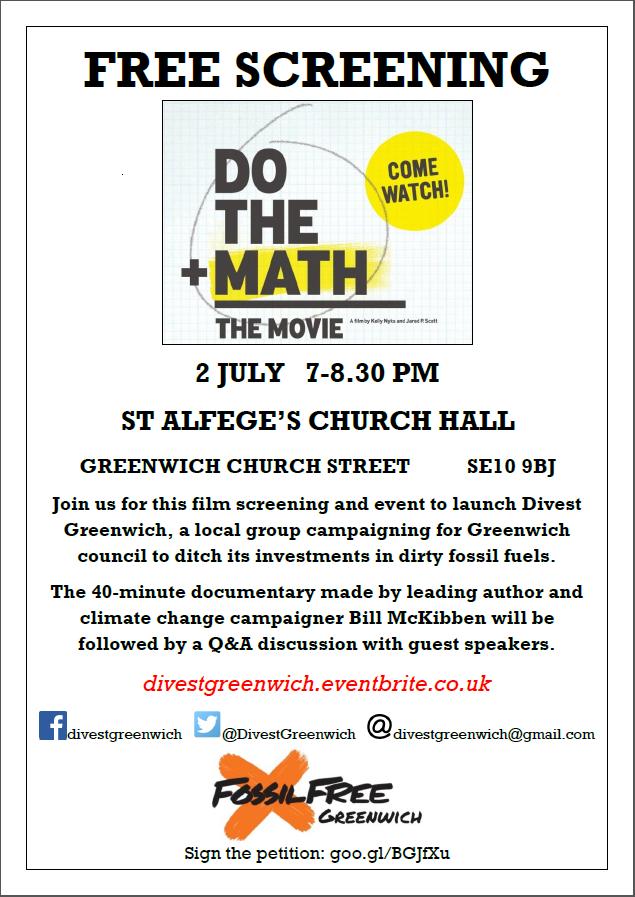 Local group Divest Greenwich, who are campaigning for the Royal Borough of Greenwich to move £17million of their pension fund investments out of fossil fuel companies’ shares, are holding a launch event at St Alfege’s Church Hall on Thursday, 2nd July at 7.00pm.  Why should Greenwich do this? Well, if we are to avoid catastrophic levels of climate change most of the reserves that fossil fuel companies hold, which provide the basis for their share prices, must not be burnt for energy. Divestment will have the twofold advantage of protecting the pension fund from consequent drops in fossil fuel company share prices as well as making a stand against the powerful lobbyists of the petrochemical industry. Thomas Greenwood, who wrote to tell me about the event, succinctly summarised the case for divestment:

The Greenwich Pension Fund has around £17 million invested directly in fossil fuel companies and more invested indirectly. Such investments carry a high degree of risk on ethical, financial and scientific grounds and the Pension Fund’s investments therefore expose the people of Greenwich to those risks.
Already, hundreds of institutions around the globe have committed to divesting from (ending their investments in) fossil fuel companies to the tune of billions of pounds, including the Church of England and the Rockefeller Brothers Fund. The Royal Borough’s Pension Fund can add significantly to this movement.
The reason we consider divestment such an important issue is because if global warming is to be limited to 2°C – the threshold for irreversible climate change – up to 80% of known carbon reserves must be left in the ground. Available evidence indicates that fossil fuel companies intend to burn enough reserves to push global warming far above 2°C, as they insist on searching for further reserves, often in the globe’s most ecologically sensitive areas. Around the globe, the first five months of this year were the hottest on record. We urgently need to act.
The Pension Fund has a fiduciary responsibility to maximise returns which can be met whilst divesting. In April 2015 MSCI, the world’s leading stock market index company, found that investors who divested from fossil fuel companies would have made an average return of 13% a year since 2010, compared to the 11.8%-a-year return earned by conventional investors, including in the years before the fall in oil prices. Moreover, if decisive action is taken by governments to limit climate change and a large amount of carbon reserves are left in the ground, shares in fossil fuel companies are likely to drop significantly in value. As such, pension funds currently investing in fossil fuels risk exposure to this ‘carbon bubble’.
We believe our local government has a responsibility to divest from an industry that’s destroying our future. By remaining open to investments in fossil fuels, the Royal Borough of Greenwich is supporting the power, influence and activities of the fossil fuel industry. We would like to see the Royal Borough of Greenwich lead the way on sustainability and cease to invest in activities that are damaging for the environment and human race.
Divest Greenwich’s launch event will take place on Thursday 2 July from 7.00-8.30pm in St Alfege Church Hall.

The launch event will include a screening of the film Do the Math which is narrated by Bill McKibben, who is the author of a dozen books about the environment, including “The End of Nature” published in 1989.  He is also the founder of climate change campaigning group 350.org. Another of the directors of 350.org is Naomi Klein whose book “This Changes Everything” documents how fossil fuel companies use their money and influence to campaign against climate change, but also the successes that campaigners against fossil fuels are having around the world. As easily extractable fossil fuel reserves have been used up extraction companies have had to move into more dangerous technologies, such as deep water drilling and fracking which have larger potential impacts on wider areas of the countryside and many more people. The only good thing about this is that it has increased and broadened the number of activists campaigning against these developments.