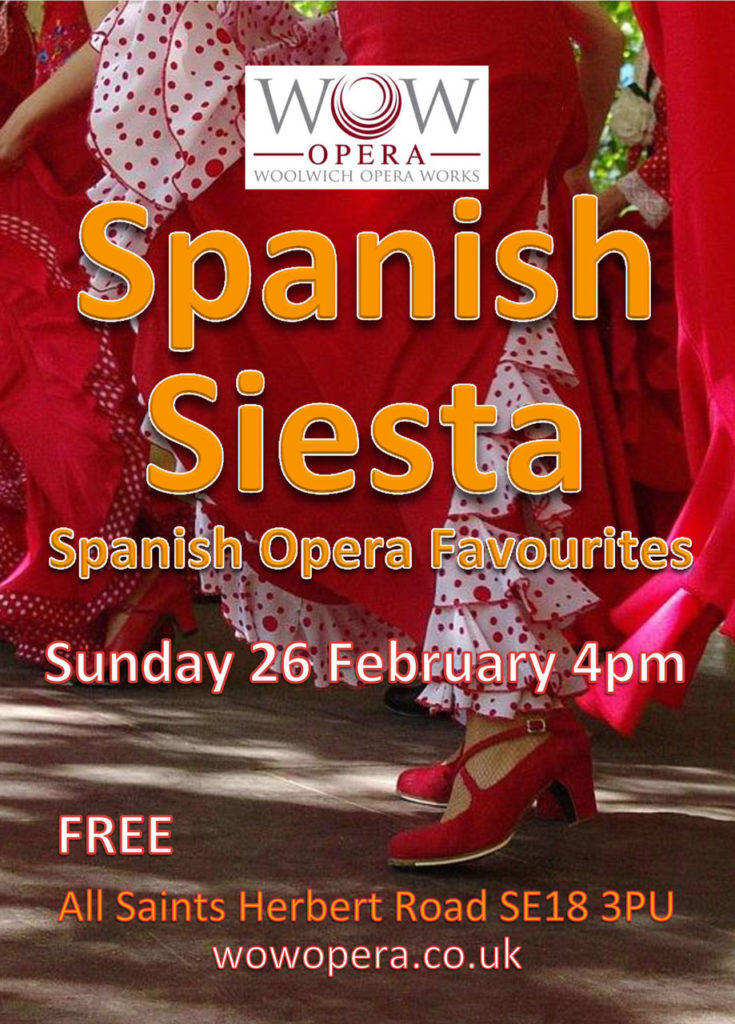 Sunday, February 26, 2017, 4:00pm 5:30pm
WOW are excited to present 4 world class singers to celebrate our one year anniversary. The theme of the concert is Spain and it includes operatic highlights from well known operas in the first half featuring Carmen, Le nozze di Figaro, Il barbiere di Siviglia, Fidelio, Don Giovanni and Il Trovatore. After a short interval the programme continues with a lighter selection of gorgeous Spanish Songs and culminates in a beautiful arrangement of Rodrigo’s En Aranjuez con mi amor.
Sopranos Donna Bateman and Sally Silver are joined by tenor Dominic Natoli and baritone Ricardo Panela who are accompanied on the piano by Jeremy Silver.
Tea, coffee and cakes will be sold in the interval and there will be a retiring collection.

Tickets are not required for Sunday’s concert, but it is possible to reserve seats (until 3.50pm) through this website.

This is WOW’s second free concert at All Saints. Founders Sally and Jeremy Silver along with soprano Namrata Shah, bass-baritone Tony Baker and tenor Tony Stocks performed a programme of opera favourites before the church’s Candlelight Carols service in December. This highly enjoyable evening, even for those like me who usually avoid opera, included operatic greatest hits such as Puccini’s O mio babbino caro, Verdi’s Libiamo ne’ lieti calici and Bernstein’s Maria, and was very well received by the audience. I’m looking forward to Sunday’s concert. 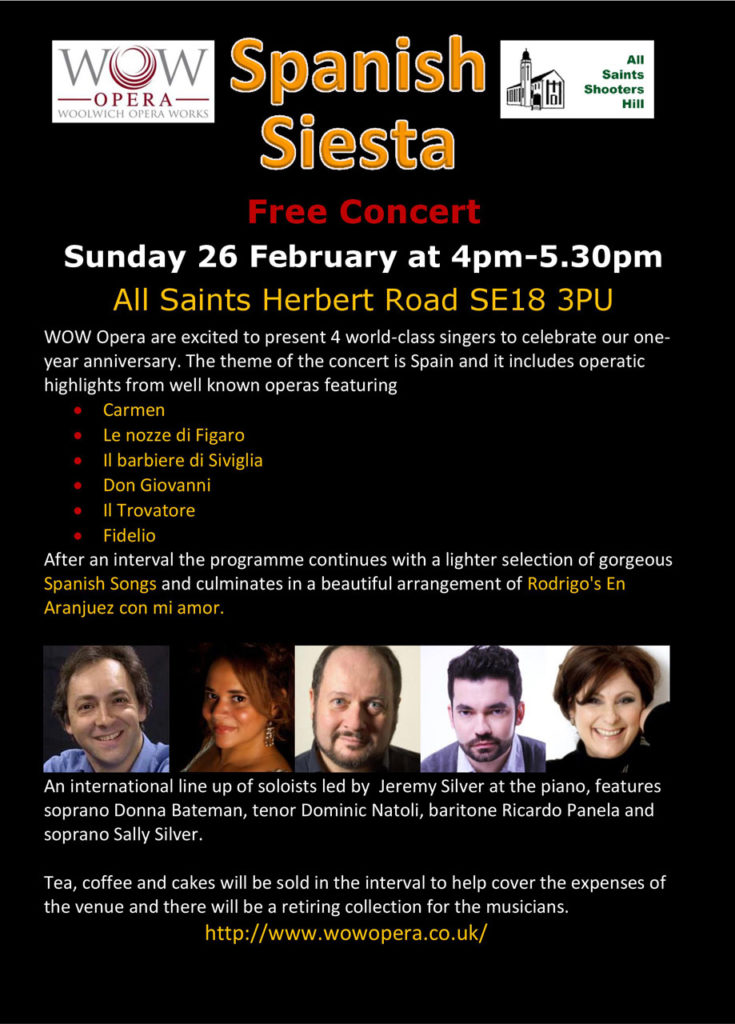 Local cat-care charity Catcuddles has been ordered to cease fostering operations at its Greenwich hub in Howarth Road SE2 within 7 days by planning enforcement officers at the Royal Borough of Greenwich council.  This follows the unexpected rejection of their application to continue the mixed use of the property as both a dwelling and for fostering cats.

Catcuddles volunteers have started a campaign to reverse the decision, including a petition to Greenwich Council to “Allow the Continued Fostering of Abandoned and Unwanted Cats In SE2” and a crowd funder to raise the money needed to appeal to the planning inspectorate to reverse the decision. The campaign has started well, with over 3500 signatures on the petition and over £3000 raised in just a couple of days.

The large team of volunteers at Catcuddles have helped many cats and people in the local area. They take in and foster cats that need a home. For example: when their owners are being evicted or are emigrating and facing the prospect of euthanizing their cats; families whose children have developed allergies and asthma from their cats; people whose parents have died and left cats behind; those who have found stray cats or have even had them give birth in their gardens; and local vets who’ve had cats dumped on their premises. They also neuter hundreds of stray cats in the area to help to keep their explosive numbers down. The cats they take in are not all housed at Howarth Road; they have a network of fosterers around the area.

And of course they are best known for pairing hundreds of formerly unwanted cats with loving adoptive families.

The dedication of the volunteers in rescuing cats is quite inspirational. One recent rescue here on Shooters Hill was of a mother cat and her 5 kittens: the Shooters Hill Six. This was a five day rescue operation which saw volunteers staked out in freezing temperatures tending traps to capture the cat and kittens. Catching them was only half the story. The tiny kittens were riddled with  ticks which volunteers had to remove by hand. Also the kittens were feral because they had had no human contact, so, as with other feral cats, volunteers had to handle them every day to prepare them for adoption. Happily all but two of the six have now been adopted or reserved for adoption.

The council planners’ reasons for refusing Catcuddles application are difficult to understand. They say that “retention of the property as a cat sanctuary creates excessive noise and odour”, but this just isn’t true. I’ve visited the Catcuddles’ Greenwich Hub myself and noticed no noise or odour. The council’s own environmental health officer has said that there was no problem with odour, and the daily care volunteers are meticulous in their hygiene. There have never been any complaints about noise, and captured cats are known to be quiet to make themselves less conspicuous. The planners also say that it “would result in the loss of the property as a dwelling house”, which is simply untrue as Catcuddles founder, Evina Koroni, lives in the house. The final reason is that it “has involved the creation of numerous structures in the rear garden which have a detrimental impact in terms of design, appearance and scale.” But the cat pens in the back garden are low key and unobtrusive, as the photographs on the charity’s web site show. From the outside the house is indistinguishable from all the other houses in the street.

There are some positive signs for Catcuddles. A group of volunteers had a very constructive meeting with one of their local counsellors, Council Leader Denise Hyland, who told them she would look into the application. The strong support on the petition and crowd funding initiatives are also encouraging. If you would like to help you can sign their petition, contribute to the appeal costs or send them your stories about adopting from or working with Catcuddles.

Dr. Mary Mills of the Greenwich Industrial History Society will be talking about the future of Enderby House at the next meeting of the Shooters Hill Local History Group which will be this Thursday, 16th February. As usual it will start  at 8pm and it will be held in Shrewsbury House. Steve e-mailed the details:

The next meeting of the Shooters Hill Local History Group will be on Thursday 16 February at 8pm at Shrewsbury House.
The presentation by Mary Mills of the Greenwich Industrial History Society will be about the future of Enderby House on the Greenwich Peninsula.
Everyone welcome, a visitor fee applies.

Enderby House is a grade II listed building which has been neglected and fallen into disrepair over the years. It was built in about 1835 by the Enderby family who established a ropewalk and a factory for making sales on the Enderby Wharf site around the house.  In the 1850s a company called Glass, Elliot & Co took over the site and it was where they jointly made the first transatlantic telegraph cable as well as many other early telegraph cables. Later they were absorbed into the Telegraph Construction and Maintenance Company (Telcon) which manufactured a second transatlantic telegraph cable at Enderby’s Wharf. This was successfully laid by the SS Great Eastern. Submarine cables were made by a succession of companies at Enderby’s Wharf up until 1975.

The area has since been redeveloped and the river front is now crowded with blocks of flats, with more being built. It is also the proposed site of a controversial cruise liner terminal: there is concern about the air pollution created by docked liners which will have to generate their own electricity using their diesel-powered engines because no shore-based generating capacity is planned. Enderby House is still standing, sandwiched between blocks of flats and the cruise liner terminal, but its future is  not entirely clear. The developers say they “are proud to be refurbishing the building into a Gastro pub and cultural hub for Greenwich”, but a group of local people have formed the Enderby Group to “secure the future of Enderby House and the cable loading equipment on the Alcatel-Lucent jetty as a permanent centre for telling the story of the sub-sea cable industry on this site, its key role in world-wide communications”. They have their own ideas about what should happen to the house and its surroundings to ensure that the area’s historical importance to modern telecommunications is not lost.

Thursday’s speaker is the secretary of the Enderby Group, so it should be a fascinating talk covering the history of Enderby House, and much more.

It’s half term next week, and as usual Woodlands Farm have laid on some interesting and educational activities for children. Hannah, the Education Officer, wrote with the details:

February Half Term Events
Wednesday 15th February. Print yourself a picture    1pm-3pm
Come along for our afternoon of printing.  Come up with your own pattern or design and then using special paint and rollers you can print this picture onto paper to take home with you.  £3 per child.  Just drop in to make your own print.
Thursday 16th February Woodlands Farm Trail – Then and now    10am – 1pm
The Woodlands Farm Trust is 20 years old!  This trail is the first in a series of events celebrating the history of the farm.  Can you follow our photo trail and recognise the different places on the farm and how they have changed in the last 20 years.  £2 per child.
Friday 17th February Get Wild in the Woods 11am – 1pm and 2pm-4pm
Come and join us in the woods as we learn how to survive in the wild. Have a go at shelter building, wild cooking over a fire and learn what animals need to survive. £4 per child
Age 7+  Booking essential, to book call 020 8319 8900

It’s the farm’s 20th anniversary this year – 20 years since it was established as a charitable trust with the aim of “promoting conservation, sustainable farming and education for the benefit of the community” – following People Against the River Crossing‘s successful campaign to prevent a motorway being built through  the farm and Oxleas Wood. Every time I visit makes me more aware of what a loss that would have been.