A talk by actress Emily Lloyd and a screening of  “Wish You Were Here”, the BAFTA-nominated film that she starred in, kick off a regular series of events at the Woolwich Grand Theatre next Wednesday, 27th June. Emily Lloyd won Best Actress awards from the Evening Standard and the National Society of Film Critics for her role in the film, and was also nominated for the BAFTA Best Actress award. She later starred in the film “A River Runs Through It” directed by Robert Redford.

This is the culmination of a lot of work by the team at the Grand, including  a successful appearance before the Greenwich Council licensing committee and the sourcing and erection of a 20×25 ft cinema screen. The erection of the screen in the main hall by Woolwich Grand Director Adrian Green and volunteers  Scot and Sean is graphically described and pictured on the Grand’s Facebook page.

Adrian intends to host a regular weekly sequence of events at the Grand, as he says:

…. we will be holding the following in the Red Room:
Wednesday- Film Screenings and Talks.
Thursday- Cabaret/Quiz Evening.
Friday- Music Night with a mixture of bands and soloists.
Saturday- Comedy Nights including stand-up and sketches.
Prices for these events will vary, so please e-mail us at info@thewoolwichgrandtheatre.com to enquire about tickets. Tickets can be bought through our paypal account or at our box office.
We will also be holding larger events in main hall once a month and these will be announced on our website and Facebook page.

These will be great evenings and we look forward to seeing you there!

The talk by Emily Lloyd on Wednesday starts at 6.30pm and the  film screening at 7.00pm. Tickets cost £10.00 and can be bought on the door or by contacting the theatre by e-mail, info@thewoolwichgrandtheatre.com. Food is available and there’s a bar ’till 12.00. The quiz on the 28th is looking good too, previous music nights were excellent and I can recommend the lunches at the Arts Cafeteria.

Update: Adrian has now confirmed the other three events for next week on the Grand’s Facebook page: 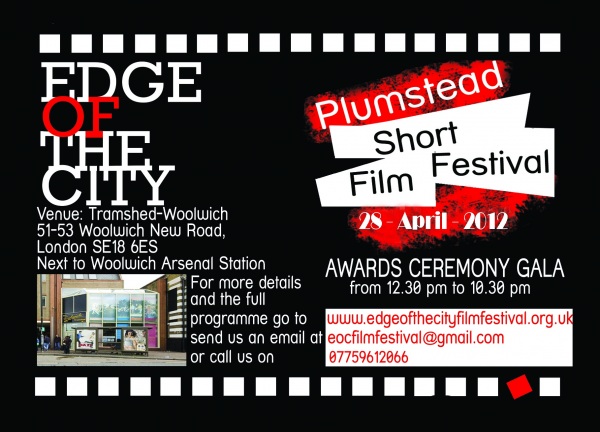 Plumstead Integration Project‘s (PiP) second Edge of the City Short Film Festival culminates on Saturday (28th April) at 12.30pm with their Gala and Awards Ceremony at the Tramshed Theatre in Woolwich. As their e-mail says:

On this special day we will celebrate the achievements of filmmakers, musicians, photographers, and other artists who have been participating in our project since November 2011.
Our project was then enabled by a small funding from Team London, Mayor of London and Reuben Foundation, which sponsored filmmaking workshops and regular film screenings, offered to the local community free of charge.
After five months of hard work we are going to celebrate all shortlisted films and announce the winners of the Second Edge of the City Film Festival 2012, alongside other shows from the local artists.

There is a packed programme for the event which includes  a photographic exhibition, a jazz act and a fashion show as well as a chance to see all the shortlisted films. The judges, film lecturer Prof. John Smith and independent film maker Jill Daniels will reveal the winning films at the awards ceremony at 9.20pm.
Tickets cost £6 or £3 for PiP members and are available from http://www.wegottickets.com/event/155818. 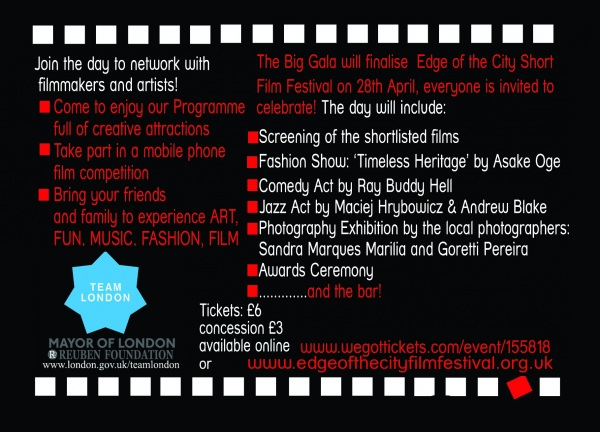 In a twist of serendipity, just as one Plumstead festival dies, another springs to life[1. the festival has another website too], thanks to the PiP.

The theme of the Festival, The Edge of the City, was chosen to evoke not only the idea of a geographical location, but a psychological state of mind. Our Festival has recognised the possibility of marginalisation of certain members of society who do not always have a voice, because of their ethnicity, age, disability, perceived social background, sexuality or income. These issues will be articulated in the selected films and discussed with filmmakers and their guests.

The festival will be a fantastic opportunity for the local community to interact with filmmakers, both amateur and professional and to enjoy a free cultural event in the local area. We have also developed this event to bring together members of the community. We will be inviting members of arts groups and institutions, local authorities, representatives of schools and community groups, and members of the press to attend and participate in our activities. We hope the network that is formed at this event will blossom into relationships that will benefit the local community and its representatives.

19th March 2011 – 2pm to 7.30pm: At St Patrick’s School Hall, Griffin Road, Greenwich, London SE18 7QG. This day is open to the public and is committed to screening documentaries and drama films other than those entered into the Festival competition. There will be a special screening of the film ‘Covered’ at 15.30 – documentary discussing the meaning of the scarf for women from different cultures. There will also be an opportunity to watch and be involved in a film editing process of a short drama Love in SE18.

20th March – 12pm to 7.00pm: At Tramshed Youth Theatre, 51 – 53 Woolwich New Road, London SE18 6ES. We will start at 12pm with screenings of shortlisted films, moving on to the awards ceremony at 2.30pm. At 4pm this year’s best films will be screened followed by Q&A’s with their directors. There will also be a special screening of the film ‘LOVE in SE18’ at the end of the day. The bar will be open throughout this event which will conclude with a networking party.