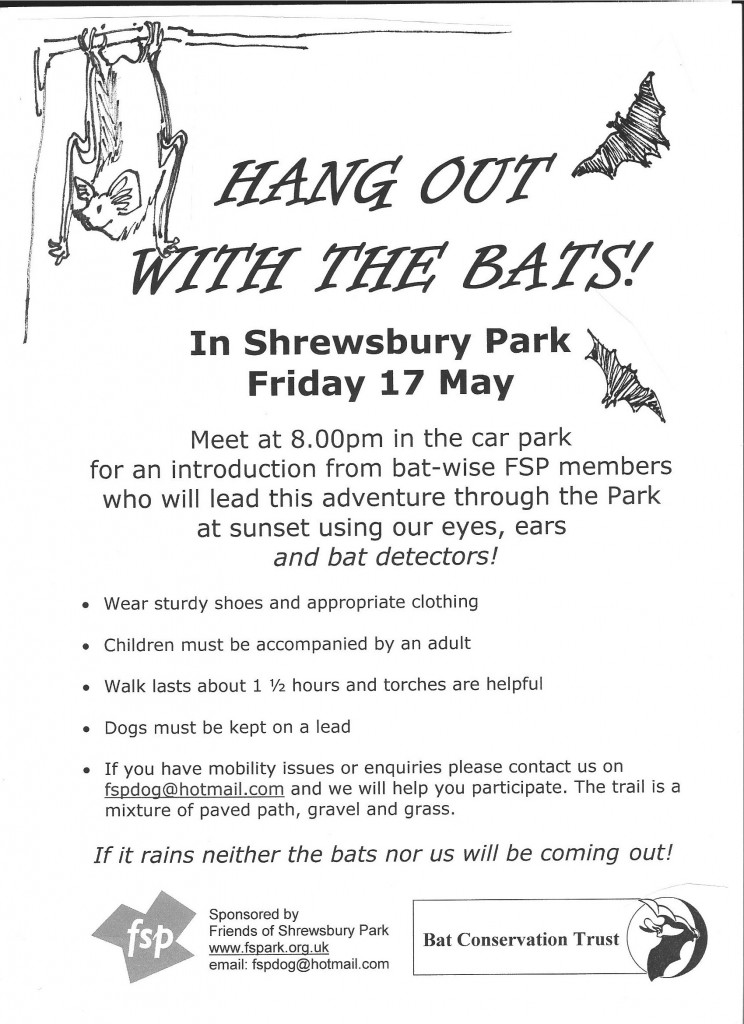 Bats are just amazing creatures; flying mammals that are superbly adapted to their nocturnal lifestyle. And much maligned – they are not vampiric blood-suckers, swooping down to latch onto a jugular vein. Admittedly a few Central and South American bats do feed on the blood of livestock such as pigs and cattle, but they lap up the blood coming from the cut they make in their prey’s vein rather than sucking it out. Even this has a good side: a drug has been developed from the enzyme in the bats’ saliva that prevents the blood clotting, which may, one day soon, be used to treat people who have had a stroke. A scientist with a sense of humour has called the drug Draculin.

The Friends of Shrewsbury Park are bat lovers. Their bat walk has become an annual event, and the next one is on Friday 17th May, meeting at 8.00pm at the car park off Plum Lane. Last year’s walk took place on one of the few dry spring days, and attendees were rewarded with detection and sightings of a number of hunting pipistrelles. Hopefully the long, cold winter hasn’t had too much effect on the bats and this year’s walk will be similarly successful. The walk will pass by the bat boxes the Friends constructed and, with council assistance, attached to trees in the park last year. Sometimes it is a year or two before boxes are inhabited, and bats move between different roost sites at different times of the year, so it will be interesting to see on Friday if the park boxes have any occupants.

Bats are a priority species in the Royal Borough of Greenwich Biodiversity Action Plan, which says in the species action plan for bats:

Many bat species roost in loft spaces in houses and this sometimes causes people concern, as there are many misconceptions about bats:
• Bats are not rodents, and do not gnaw at wood, wires or insulation.
• All British bats consume insects and therefore their droppings are dry and crumbly, they do not putrefy like mouse droppings.
• Bats do not nest and therefore do not bring bedding material or insect prey into roost spaces.
• Bats are clean, and spend many hours grooming.
• No species of British bat feed on blood.

A good way to find our more about bats is to go along to the Bat Fest organised by the Bat Conservation trust and the Natural History Museum, which this year runs over the weekend of 1st and 2nd June at the museum in South Kensington. Volunteers from the London Bat Group will be on some of the stands. Last year it included various batty activities for children,  some more detailed technical stuff about echolocation and a series of Nature Live talks. Also there was the marvellous Jenny Clark, a bat carer who has converted part of her home in Forest Row, Sussex into a bat hospital. She brought along some of the rescue bats that couldn’t be released back into the wild because, maybe, they were unable to fly or had been hand-reared from babies. It was a rare chance to get close to live bats, and to learn how cute and fragile they are, and that they purr when stroked.

If you share my fascination with batty matters, take a look at these Youtube videos of bats in action. First, on  BBC’s Top Bat, a sequence showing Daubenton’s Bats hunting at Fountains Abbey in Yorkshire.