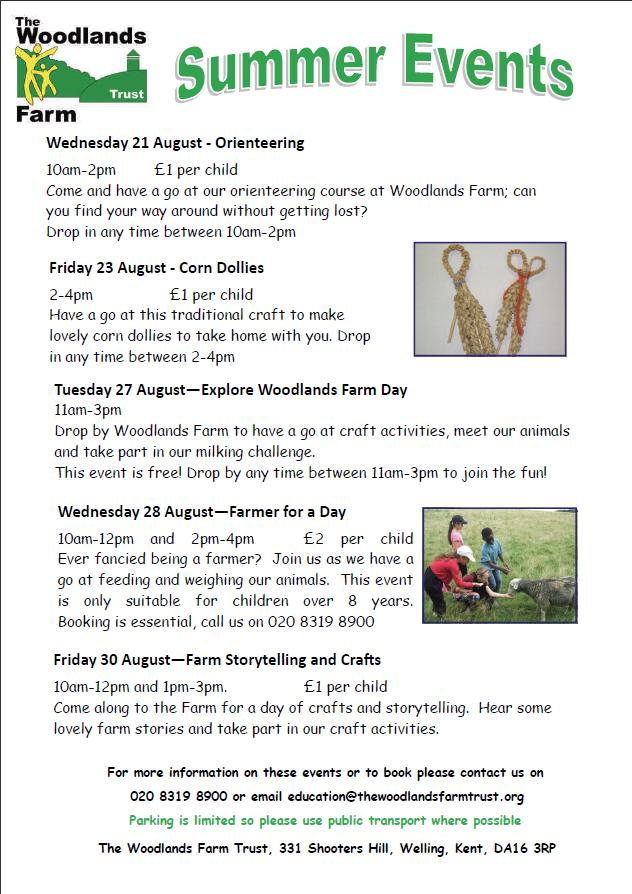 Hannah, the Education Officer at Woodlands Farm, wrote with details of their Summer Holiday Activities for children and about a series of bat walks at the farm in the next couple of months. The children’s activities are:

Come and have a go at our orienteering course at Woodlands Farm; can you find your way around without getting lost?

£1 per child, accompanying adults free. Drop in any time between 10am-2pm.

Have a go at this traditional craft, to make lovely corn dollies to take home with you.

Drop by Woodlands farm to have a go at craft activities, meet our animals and have a go at our milking challenge. This event is free and you can drop by any time between 11am-3pm to join the fun!

Ever fancied seeing what it is like to be a farmer? Join us as we have a go at feeding and weighing our animals as well as walking our fields to check all our animals. This event is only suitable for children over 8 years. Booked is essential to book call 0208 319 8900

Come along to the farm for a day or crafts and storytelling. The farm is a place full of wonderful stories so come along to hear some lovely farm stories and take part in our craft activities. 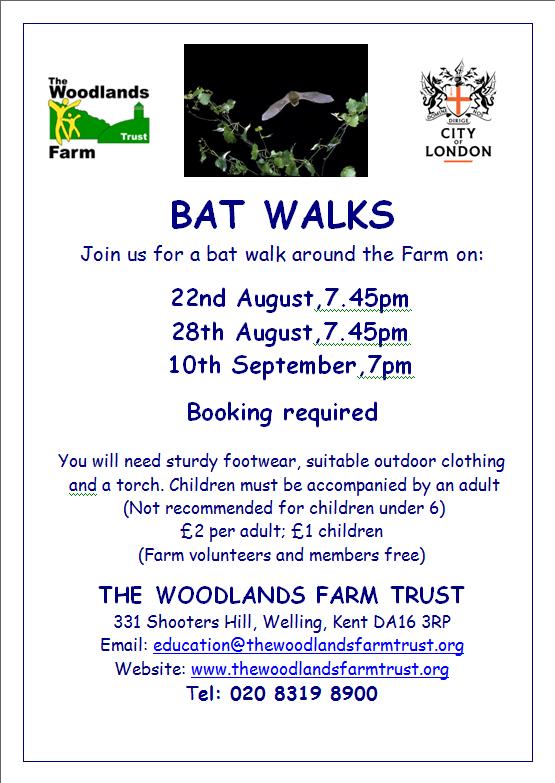 Join us for a bat walk around Woodlands Farm. We have a number of different bat species living on the farm so this is a great opportunity to find out more about bats and see what we can find. You will need sturdy footwear, suitable outdoor clothing and a torch. This activity is not recommended for children under 6. £2 per adult and £1 per child. Booking is essential. To book call 020 8319 8900.

Shooters Hill is a great place for bat spotting, and they have been seen or detected at various locations around the hill as can be seen in the Bat Conservation Trust‘s Big Bat Map, Shooters Hill snippet above. As well as the Common and Soprano Pipistrelles seen in Shrewsbury Park on the Friends’  bat walk, the two Pipistrelle species, Noctules and possibly Leisler’s bats have been detected in Oxleas Wood and Soprano Pipistrelles regularly forage over Eaglesfield Park Lilly Pond. Woodlands Farm contribute to the National Bat Monitoring Programme annual survey, which means they look for bats on a transect route of 12 walks and 12 stops at the beginning and end of July each year. This year they detected quite a few Common & Soprano Pipistrelles and Noctules, which bodes well for their bat walks.

There are likely to be other species of bat in the area, and it would be interesting to know which of the UK’s 18 species are here. At the end of the nineteenth century 8 species were recorded in Woolwich and West Kent according to the 1909  Woolwich Surveys by Grinling, Ingram and Polkinghorne. Their section about mammals starts with a list of bat species that had been seen:

This list is compiled from the “List of Mammalia” in the “Fauna of Blackheath,” published in 1859; the “List of the Mammals of Bromley, Kent,” published by the Bromley Naturalists’ Society in 1895; a ” MS. List” from A. S. Kennard ; and a “MS. List” from B. W. Adkin. It will be interesting to note that several species, now very rare or extinct in the area, were at one time even common in the heart of the district.

Probably if more lists were available from the outlying part of the area, a better view of the distribution would be obtained. The contractions used are as follows :

Some names have changed: the Noctule is referred to as the Great Bat, which is fitting for one of the UK’s largest bats, the Pipistrelle is called the Common Bat which is also apt as it is the most common in the UK and Leisler’s bat is the Hairy Armed Bat. Also at that time it wasn’t known that there was more than one Pipistrelle species, and that the Common Bat was two species: the Common and Soprano Pipistrelles. That wasn’t certain until 1997 when it was confirmed by DNA analysis. The Long-eared Bat was “fairly common” in the 1909 Woolwich Surveys, and the Brown Long-eared is still common throughout the British Isles. It is quite difficult to detect because its echolocation calls are very quiet, and my bat guide says it is more often seen than heard on bat detectors. They are such amazing looking creatures, with ears that are almost as long as their bodies, that they are definitely one to look out for on bat walks in the woods.