Shooters Hill Local History Group‘s next meeting at Shrewsbury House this Thursday, 18th February at 8.00pm is a presentation about St. George’s Garrison Church. Steve wrote with the details:

Julie Ricketts, Heritage Project Officer for St George’s Garrison Church, Woolwich will be giving a presentation to the Shooters Hill Local History Group on Thursday 18 February at 8pm at Shrewsbury House, Bushmoor Cresent, Shooters Hill.
A visitor fee applies.
Julie will be covering the Garrison Church’s past and present and discussing plans for future events as well as volunteering opportunities.
All welcome.

It’ll be interesting to hear about what’s planned for St George’s. They have recently appointed a board of trustees to be responsible for the church and the area of land around it as far as the Second Boer War memorial on the corner with Woolwich New Road. The board will be chaired by Tim Barnes QC, champion of many Greenwich causes: he was chair of the Greenwich Society and the St Alfege’s restoration appeal and is currently also a trustee of the Greenwich and Bexley Community Hospice and chair of the Friends of Westcombe Woodlands. Other trustees include the Bishop of Woolwich, the officer Commanding the Woolwich Barracks and Woolwich Common councillor David Gardner.

Now that phase 1 of the restoration of the chapel is complete the team there are thinking about raising money for phase 2. They are keen to replace the wooden doors at the entrance with glass doors so that the interior will be visible to passers-by, and further work is needed on the pulpit and altar as well as the other mosaics. Public access and use of the chapel is important, and from the start of the year it has been open every Sunday from 10.00am to 1.00pm, with help from a team of volunteers, and it is planned to open for longer when the weather improves later in the year.

Volunteers will be key to the future of St George’s, and Julie will be talking about volunteering opportunities at her presentation on Thursday. It should also include some of the marvellous photographs of the garrison church in it’s heyday. Well worth a visit to Shrewsbury House.

There are just a few days left to tell TfL our opinions about their proposed new river crossings at Gallions Reach and Belvedere: the consultation closes this Friday, 12th February. We can respond through an online survey with just 5 questions at:

We can also tell TfL what we think by email to rivercrossings@tfl.gov.uk or by  writing to FREEPOST TfL CONSULTATIONS’.

It’s an opportunity to tell Transport for London of our concerns about the increased traffic congestion in our area that their own traffic models predict will come as a result of the new crossings: congestion that will lead to even more dangerous air pollution and the health problems that it causes. The excellent Bexley Against Road Crossings web site has many more suggestions about what to say to TfL.

The threat of traffic related air pollution is not hypothetical. The No to Silvertown Tunnel campaign undertook an extensive citizen science project to measure Nitrogen Dioxide levels across Greenwich in 2014. A snippet of the results, which was also published on the No to Gallions campaign web site, is shown below.

The NO2 results map shows that the UK Air Quality Strategy and EU legislation  40 µg m³ limit for NO2 was exceeded at most measurement locations in Shooters Hill and Plumstead: at two sites along Plumstead Common Road and all sites along Shooters Hill and Shooters Hill Road. The cross roads at Shooters Hill Road and Academy Road, close to the Greenwich Free School and just down the hill from Christchurch Primary School  had an NO2 level 162.5% of the limit. A similar level was detected down in Woolwich at the junction of John Wilson Street and Wellington Street, close to Mulgrave Primary School. The level near Greenslade Primary was only just below the limit. Children are particularly vulnerable to the health effects of NO2 from traffic pollution.

I’ve never really understood TfL’s argument justifying new crossings by the fact that there are many more road crossings to the west of tower bridge than to the east. It seems obvious to me that you would have fewer bridges closer to the sea because the river gets wider at it nears its estuary. A better comparison might be the difference in public transport, such as the tube, between north-west and south-east London. This is illustrated by the tube map variation from Geofftech, shown above, which reflects the tube map across to the south-east. If we were as well served as the other side of London we would have tube stations at the Rotunda, Woolwich Common, Shrewsbury Park and Plumstead Gardens, and the tube network would stretch as far as Tunbridge Wells.

TfL would have far more chance of reducing traffic congestion and pollution by improving our current very unreliable and overcrowded public transport and creating new public transport links than by building more roads which will attract more traffic. It’s well worth reading former Greenwich councillor Alex Grant’s very informative post: The supporters of new roads across the Thames are stuck in the past. Without rail links they’d be a disaster for east London for more on the history of east London river crossings, how other modern European cities have tackled the problem of congestion and the recurrent fears that a motorway will be built through Plumstead, Woodlands Farm and Oxleas Wood.

Transport for London seem determined to push ahead with their planned crossings: a recent e-mail from them said:

Last week Transport for London’s Board gave approval for us to submit a Development Consent Order to the Secretary of State for Transport for powers to implement the Silvertown Tunnel scheme.  Our application will include a Consultation Report, which will set out our response to all of the issues raised in our recent consultation.  We received more than 4,000 responses to the consultation and these are continuing to help inform our final plans.
We plan to submit an application for powers to implement the Silvertown Tunnel scheme in the spring 2016, and we will contact you again at this time once we are in a position to publish our Consultation Report.
If our application is accepted by the Secretary of State, there will be a public examination on the scheme managed by the Planning Inspectorate. In that case, you will have an opportunity to make written representations and take part in hearings as part of the examination. We will explain how you can take part in the examination when we write again, later this spring.

If you’re concerned about how these new crossings will affect traffic congestion and pollution in south-east London then you might like to attend the No to Silvertown Tunnel campaign’s annual general meeting which is at Mycenae House, Blackheath, on Thursday 18 February at 8pm. They ask that anyone planning to attend sign up at https://www.eventbrite.co.uk/e/no-to-silvertown-tunnel-agm-2016-tickets-21083026901

Oh, and complete the TfL East of Silvertown consultation before Friday. 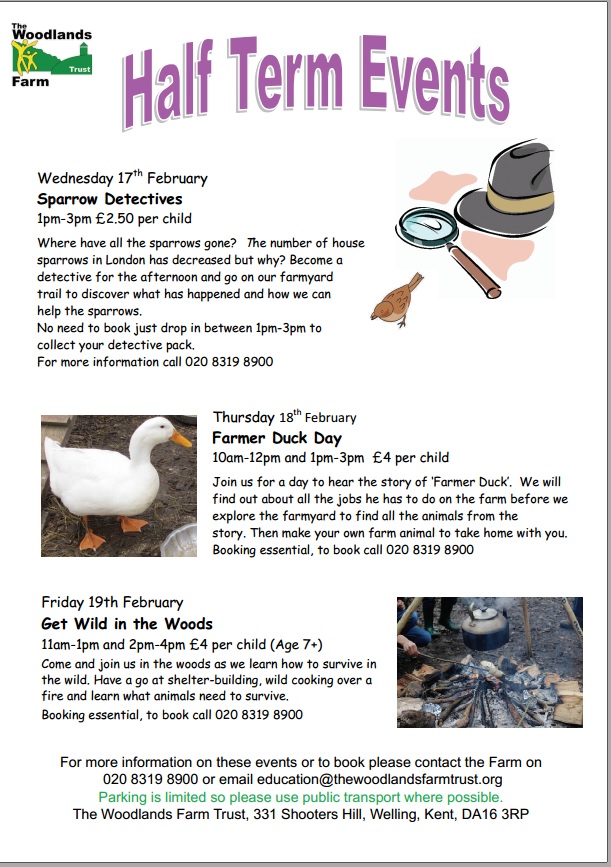 Woodlands Farm has activities for everyone during February: there is the Big Farmland bird count next Monday 8th, a St. Valentine’s Walk on Sunday 14th and their children’s activities during half term week from 17th to 19th.

Hannah, the farm’s Education Officer sent details of their February half term events for children:

Wednesday 17th February    Sparrow Detectives    1pm-3pm
Where have all the sparrows gone?  The numbers of house sparrows in London have decreased but why? Become a detective for the afternoon and go on our farmyard trail to find out what has happened and how we can help the sparrows.  £2.50 per child.  No need to book just drop in between 1pm-3pm to collect your detective pack.  For more information call 020 8319 8900
Thursday 18th February        Farmer Duck Day    10am-12pm and 1pm-3pm
Join us for a day all about the story of ‘Farmer Duck’.  We will start by reading the story of Farmer Duck and finding out about all the jobs he has to do on the farm, before going for an explore of the farmyard to visit all the animals from the story.  The make your own farm animal to take home with you.  £4 per child.  Booking is essential, to book call 020 8319 8900
Friday 19th February         Get Wild in the Woods        11am – 1pm and 2pm-4pm
Come and join us in the woods as we learn how to survive in the wild. Have a go at shelter building, wild cooking over a fire and learn what animals need to survive. £4 per child
Age 7+  Booking essential, to book call 020 8319 8900

Just a reminder that it is the Big Farmland bird count next Monday 8th Feb.  We will meet in the farmyard at 9.30am before heading out to the fields for the half hour count.  Please bring binoculars with you, but we do have some we can lend if you don’t have any.

This is the farmers’ equivalent of the RSPB’s Big Garden Birdwatch, but is organised by the Game & Wildlife Conservation Trust. Last year the farm’s volunteers did the count over two days and spotted 17 different bird species:

Then the next of the farm’s series of free monthly guided walks is the St. Valentine’s Walk on Sunday 14th February, starting at the green Education Building at 10am.

And if this all sounds far too energetic then just drop in and see the pregnant ewes in the barn waiting for the lambing season and Lambing Day on Sunday 10th April.