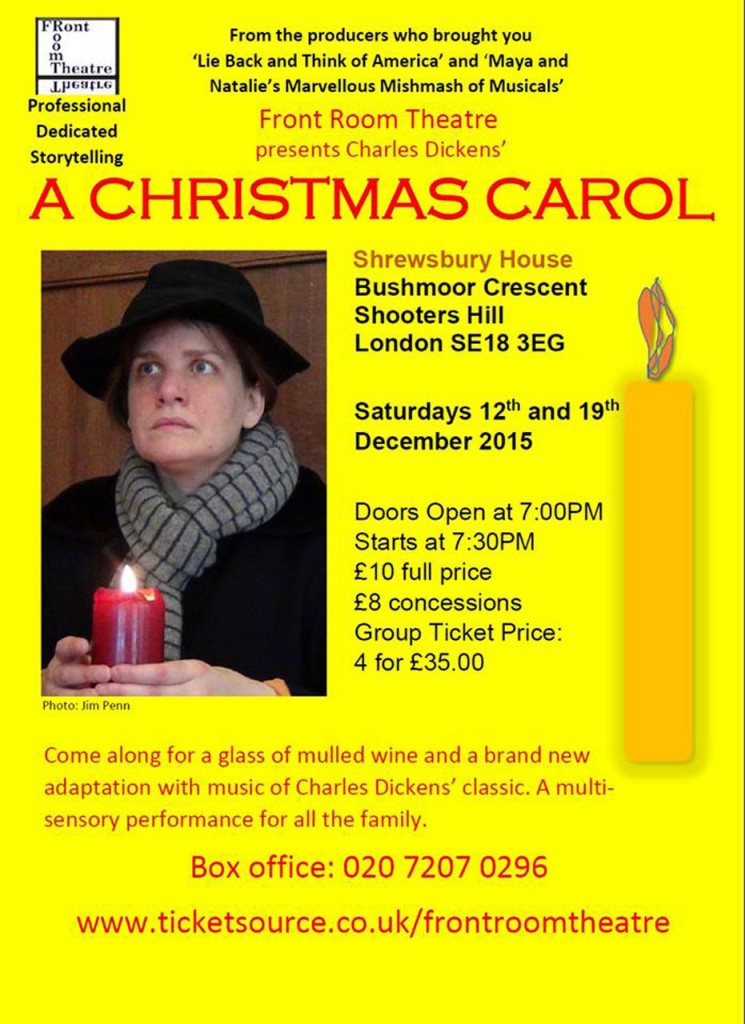 Local theatre group Front Room Theatre will be presenting their adaptation of Dickens’ A Christmas Carol at Shrewsbury House on Saturdays 12th and 19th December at 7.30pm. Tickets are available from TicketSource and cost £10 (concessions £8).

The adaptation is billed as a “multi-sensory experience for all the family”, and includes new music by local actor Natalie Wilcox and a special composition with lyrics by Natalie and music by Joseph Finlay. The play’s narrator is Sarah Barrowman.

Oh, and there’ll be mulled wine. 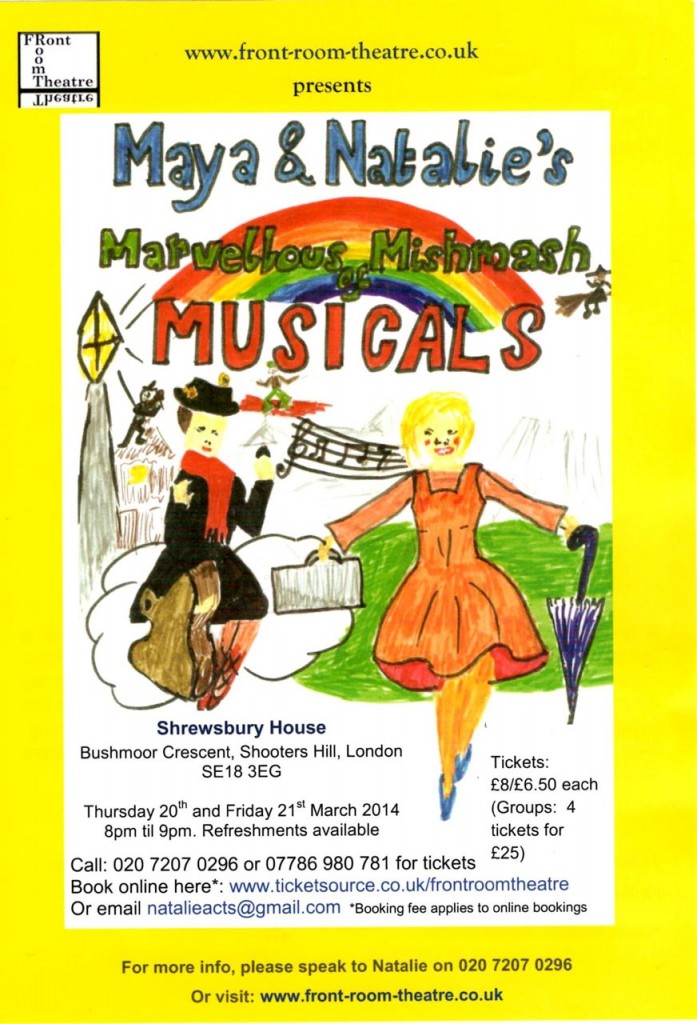 We heard a little of local actor Natalie Penn‘s excellent singing voice in Front Room Theatre‘s last production at Shrewsbury House, “Lie Back and Think of America”. Now there’s an opportunity to hear more of her singing in  their latest production, “Maya and Natalie’s Marvellous Mishmash of Musicals” which is on at Shrewsbury House on Thursday 20th and Friday 21st March. Front Room Theatre’s web site gives more details:

Front Room Theatre presents ‘Maya and Natalie’s Marvellous Mishmash of Musicals’ at Shrewsbury House on Thurs 20th and Fri 21st March at 8pm til 9 with refreshments available. Featuring the Woolwich Singers, and produced by the team behind ‘Lie Back and Think of America’, this new show interweaves musical numbers into stories from the lives of performers Maya Levy and Natalie Penn. Accompanied by world class musician Joseph Finlay, the show promises to be a wonderful evening’s entertainment. Tickets are £8 full price and £6.50 concession, with a group deal of 4 for £25. For tickets, call 020 7207 0296 or 07786 980 781 or email artistic.director@front-room-theatre.co.uk For online bookings please visit www.ticketsource.co.uk/frontroomtheatre (online booking fee applies, no fee for phone or email bookings)

Best to book soon if you want to see Maya and Natalie’s musical – there aren’t many tickets left on www.ticketsource.co.uk/frontroomtheatre, though as Natalie comments below more are available direct from her. 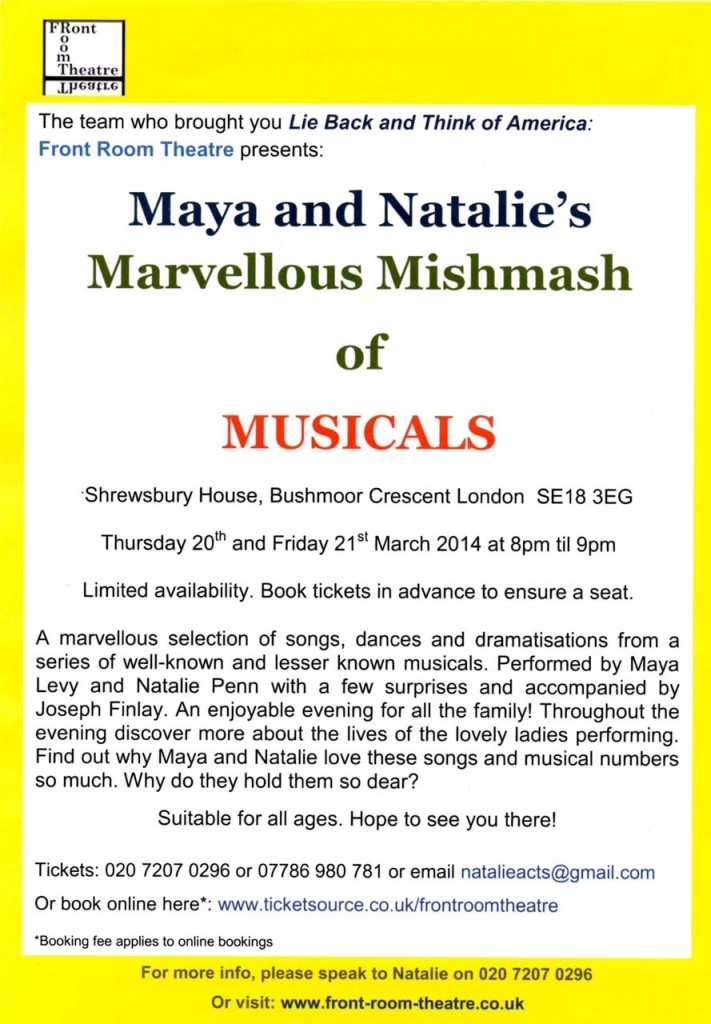 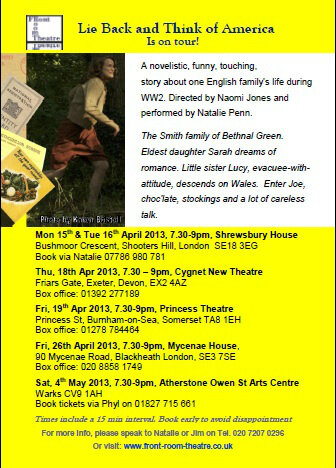 Theatre comes to Shrewsbury House next month when Shooters Hill based Front Room Theatre present their play Lie Back and Think of America. The one-woman, multi-role drama performed by local actor Natalie Penn and directed by Naomi Jones starts a UK tour at Shrewsbury House on 15th and 16th April. It will also play at Mycenae House in Blackheath on 26th April.

1940’s London. Sarah wishes dad could meet GI Joseph. Evacuee-with-attitude, little sister Lucy descends on Wales. Can Sarah find the courage to tell them the truth? Engaging multi-role one-woman show. ‘Compelling … well written’ (Soho Theatre). ‘Amazing … kept us all enthralled throughout … a show good for both young and old’, ‘We both thoroughly enjoyed it and thought that Natalie was brilliant’ (audience comments).

She was also in the video for Deptford band Athlete‘s Black Swan Song which was released to raise money for the Royal British Legion’s Poppy Day Appeal. The song, described as “powerful and moving” is about the death of the grandfather of Athlete’s lead singer and guitarist,  Joel Pott. The video is certainly powerfuul and moving: I’ve included it below as a taster for what you might experience on April 15th and 16th.