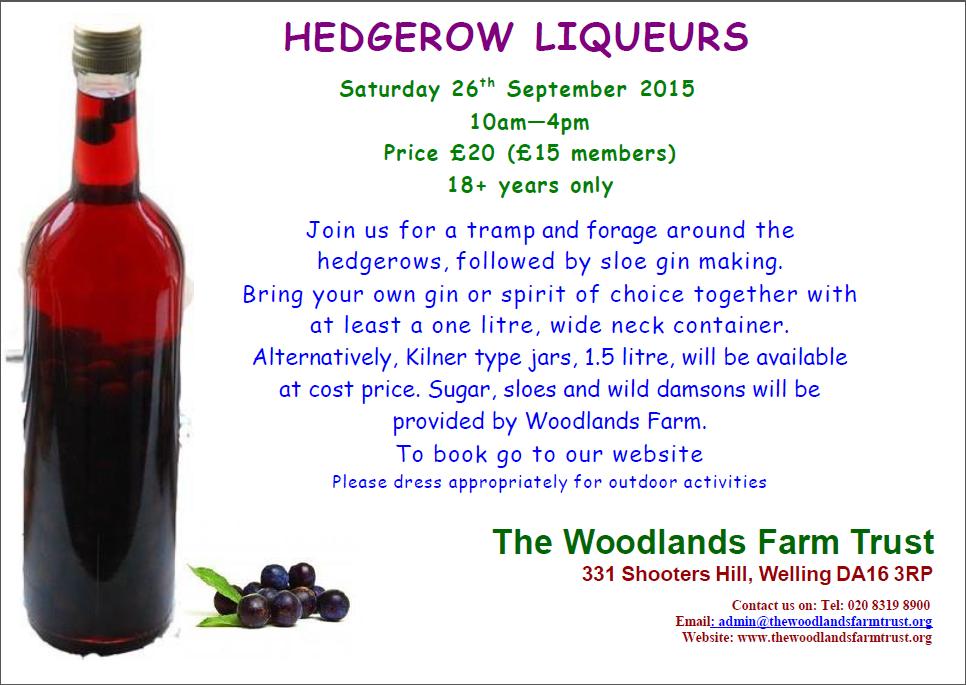 It’s autumn and the wild fruit is ripe at Woodlands Farm: the season to slowly forage for sloes and damsons and prepare some sloe gin. Maureen from the farm wrote to tell us about a chance to make some Hedgerow Liqueurs next Saturday:

Hedgerow Liqueurs
Saturday 26 September 2015 10am-4pm
Price: £20 (£15 members) 18+ years only
Join us for a tramp and forage around the hedgerows, followed by sloe gin making. Bring your own gin or spirit of choice together with at least a one litre, wide-neck container. Alternatively, Kilner type jars, 1.5 litre, will be available at cost price. Sugar, sloes and wild damsons will be provided by Woodlands Farm. Book early as numbers are limited. Please dress appropriately for outdoor activities.
To book your tickets go to our website at: www.thewoodlandsfarmtrust.org

Tickets are available through eventbrite: https://www.eventbrite.co.uk/e/hedgerow-liqueurs-tickets-18554315457 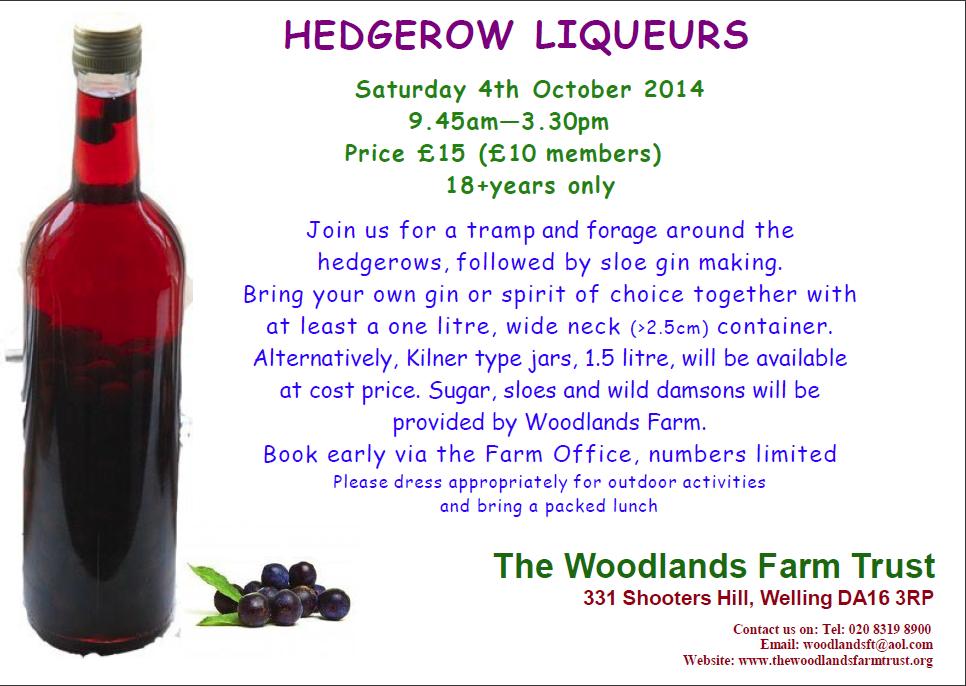 Hannah from Woodlands Farm e-mailed to say that the sloes on the farm are ready to be harvested already, a lot earlier than usual, so they have hastily arranged their annual Hedgerow Liqueurs day for Saturday 4th October 2014 :

Join us for a tramp and forage around the hedgerows, followed by sloe gin making.
Bring your own gin or spirit of choice together with at least a one litre, wide neck (>2.5cm) container. Alternatively, Kilner type jars, 1.5 litre, will be available at cost price. Sugar, sloes and wild damsons will be provided by Woodlands Farm.
Book early via the Farm Office, numbers limited
Please dress appropriately for outdoor activities and bring a packed lunch

There’s another new arrival to visit at the farm: a British White calf  born recently, seen below with her mother Clover. 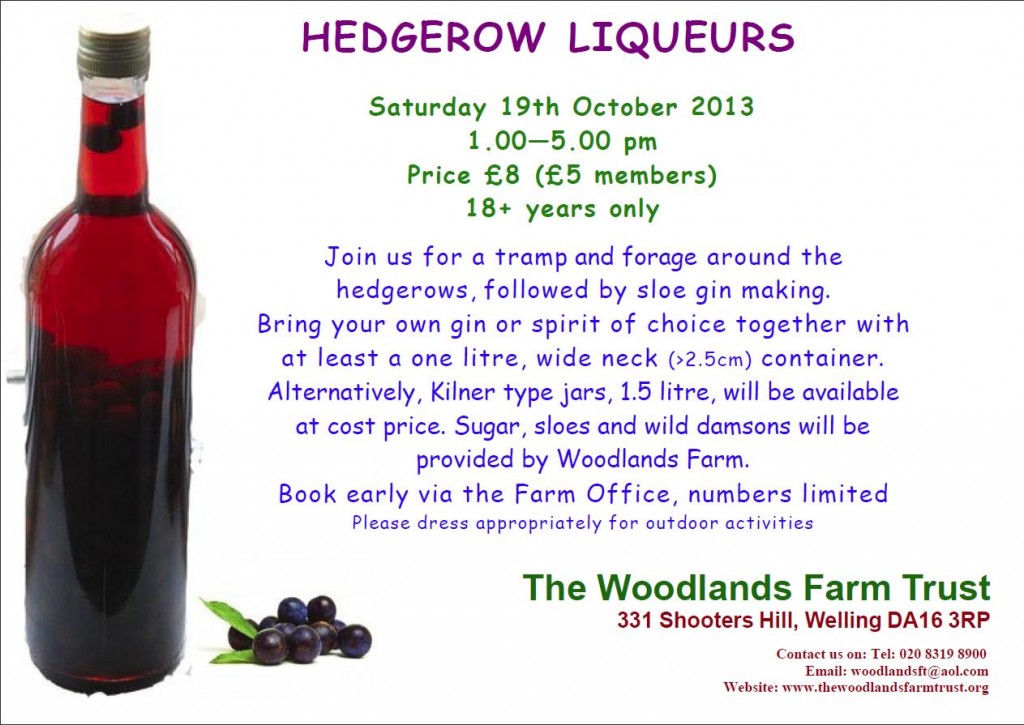 Autumn is a fruitful foraging season, and Woodlands Farm is a fruitful place to forage for sloe berries and wild damsons. They will be foraging on Saturday, and using some of the fruit they gather to make Sloe Gin. Barry Gray from the farm wrote with details:

I attach a flyer for our autumn forage for sloes and wild damsons, with an opportunity to make sloe gin. This is a chance to see Woodlands Farm in autumn, hunt for wild fruit in the hedgerows and learn to make delicious country liqueurs in time for Christmas. Every participant leaves with a bottle of delicious hooch!

Saturday 19th October 2013
1.00—5.00 pm
Price £8 (£5 members)
18+ years only
Join us for a tramp and forage around the hedgerows, followed by sloe gin making.
Bring your own gin or spirit of choice together with at least a one litre, wide neck (>2.5cm) container. Alternatively, Kilner type jars, 1.5 litre, will be available at cost price. Sugar, sloes and wild damsons will be provided by Woodlands Farm.
Book early via the Farm Office, numbers limited

Just so you know what to look for there are some photos below of sloe berries on the blackthorns at the farm, and there’s a Sloe Gin recipe in a previous post. 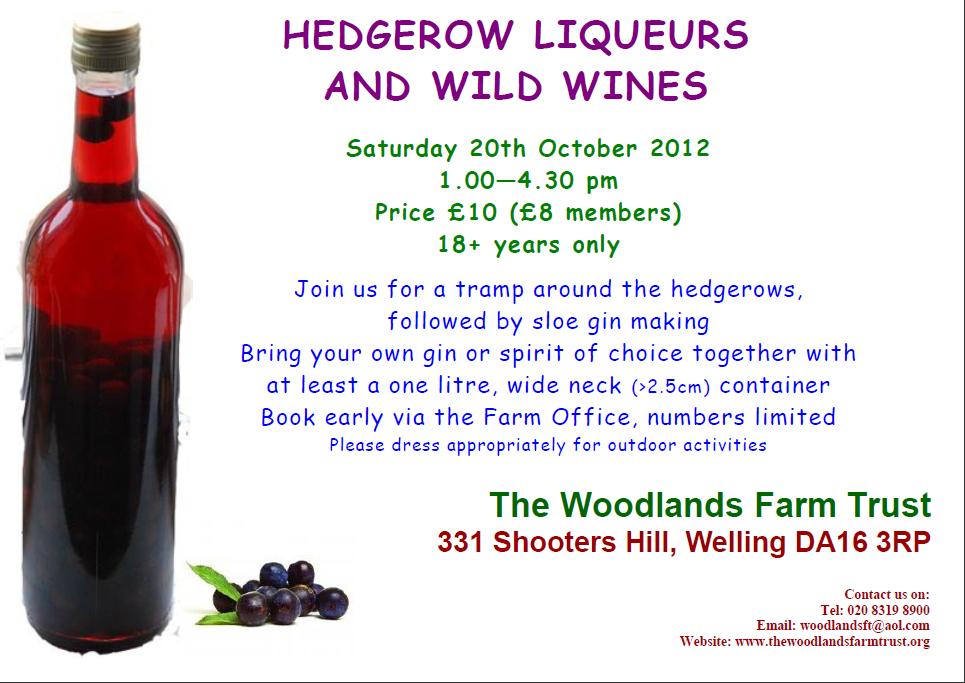 Maureen from Woodlands Farm sent me details of their 2012 Hedgerow Liqueurs and Wild Wines event on Saturday 20th October:

Saturday 20th October 2012
1.00pm-4.30pm
£10 (£8 for Woodlands Farm Trust members)
Over-18s only
Join us for a tramp around the hedgerows, followed by sloe gin making.
Bring your own gin or spirit of choice together with at least a one litre, wide neck (>2.5cm) container.
Book early via the Farm Office, numbers limited.
Please dress appropriately for outdoor activities.

To whet your appetite for sloe gin there’s a reminder of how it is made in this previous post.

While there you might like to drop in on their latest arrival – a little white bull born to Ennis, one of the farm’s Irish Moiled cows, yesterday evening. I hear there might be a competition to name the bull at the Woodlands Farm Apple Day on Sunday. Meanwhile here are some photos of Ennis and her calf…

Harumph, just when you thought you were winding down, Woodlands Farm ask for a mention…oh well, can’t really refuse them of all people…plus, I recently noticed they had some fine looking blackthorn bushes brimming with sumptuous looking sloe berries, which reminds me to get foraging myself. Sloe berries can also be found in Oxleas Woods and Shrewsbury Park, and now is probably as good a time as any to collect some, although some people wait until after the first frost, which sweetens their taste a little.

Saturday 8 October 2011
1.30pm-5.00pm
£10 (£6 for Woodlands Farm Trust members)
Over-18s only
Pick your own fruit to make exciting hooch for Christmas using wild damsons and sloes.
Bring your own gin or spirit of choice, together with a container of at least 1 litre capacity with a wide neck (larger than 2.5cm).
Please dress appropriately for outdoor activities.

--Steps
whizz and sieve the berries
mix the juice & sugar
whisk the cream into soft falling peaks
fold ingredients together
spoon into a carton
half freeze (about 3 hours)
whisk again, add a few whole berries, and wait...

Bramble time is here again! I’ve tried various recipes over the years: crumbles, pies, juice, jelly and jam, but when I was on my holidays this year I came across some blackberry ice cream which was so nice I decided to try making some myself, luckily it was easy, the trickiest part being the waiting around.

Back in October when the sweet chestnut season was in full swing, I mentioned that I was looking forward to the first frost of the year, the seasonal cue to make sloe gin… however climate chaos (or cyclical warming as some would have it) appears to have put a kibosh on my plans, as whilst I patiently waited for jack frost to turn up and ice those berries near the duck pond, someone or something came along and snaffled the lot!

My first thoughts were that some human(s) had picked them all, but considering how high up some had been, I began to wonder if perhaps those pesky parakeets had been at them?

Anyway, today I was out testing the unofficial shortcut from Dot Hill to Cheriton Drive (very muddy), and I stumbled upon a whole load of blackthorns at the entrance to the old allotments! Luckily enough I still had a bit of gin left (which I’d been drowning my sorrows in after the loss of the other sloes), so I grabbed about 40 or so, plus a thorn, leaving plenty enough for any other foragers/birds in the area. There’s also a load of rosehips there too, at least that’s what I think they are.

The home made recipe is totally straightforward, but superior to the shop-bought version, which apparently gets made with rough spirits and cordial. Essentially, you just use the sloes to double the amount of drink, and it makes a very pleasant winter warmer:

It was a lovely sunny day yesterday and lots of dogs were out taking their people for a walk and cavorting around the woods at this time of the changing seasons. In august I remarked on the bumper crop of blackberries to be found on the hill, and it’s also been a good year for the Sweet Chestnut trees in Oxleas Woods, with their crop in full swing around about now.

In just a few prickly minutes, my pockets were full, and before long the nostalgic aroma of roasting chestnuts filled the kitchen (luckily this wasn’t joined by the sound of explosions as they had their tips cut off before going under the grill), I also saved a few to plant in pots. Italian chestnuts, which are about twice the size, are also in season, and can be bought in the run up to Christmas; and the west-end chestnut sellers will probably be setting up their little fires around this time.

I’m now looking forward to the first frost, which will be the cue to make sheperdleas sloe gin, this time of year is also a busy one for fungi, who make a strong showing in Oxleas Woods in autumn, especially on the lower, damper slopes, although I’m not really sure which ones are poisonous/hallucinogenic/inedible/edible, perhaps the rangers might be able to answer this kind of question on one of their parkland rambles.

Well, 2009 was not a good year for plumstead plums, well at least in my orchard anyway, the late frost zapped the spring blossoms with the result that I only got 6 victorias this year 🙁

On the plus side, the weather conditions this year have led to a bumper crop of wild blackberries, I have never seen so many on the hill, and whilst still a bit sharp tasting, and with sharp thorns for protection – I had a go at my first blackberry and apple pie of the summer today, and it goes like this:

With this year’s yields looking so promising, i’m hoping to make jam next.